I’m a bit behind the times.  Over breakfast the other morning, I tried to blame it on living for a year in Haiti—a veritable Outback when it comes to popular culture here in the US.  (We often didn’t have electricity, let alone a television.)

But Sara (my partner) says that’s no excuse–that’s not the case—that if Haiti were to blame she, too, wouldn’t know who on “Dancing with the Stars” rides horses for a hobby.  (Hell, does anybody besides Sara know that?)

Over that same breakfast (out, at an actual restaurant), I also told Sara that I’d lived in Haiti so long, I’d almost forgotten I could leave the house–like for fun.

You see, when we lived in Port-au-Prince the year after a massive earthquake pretty much wiped out the city, things were politically unstable and semi-unsafe—at least to the degree that we had two armed guards posted at our house around the clock. 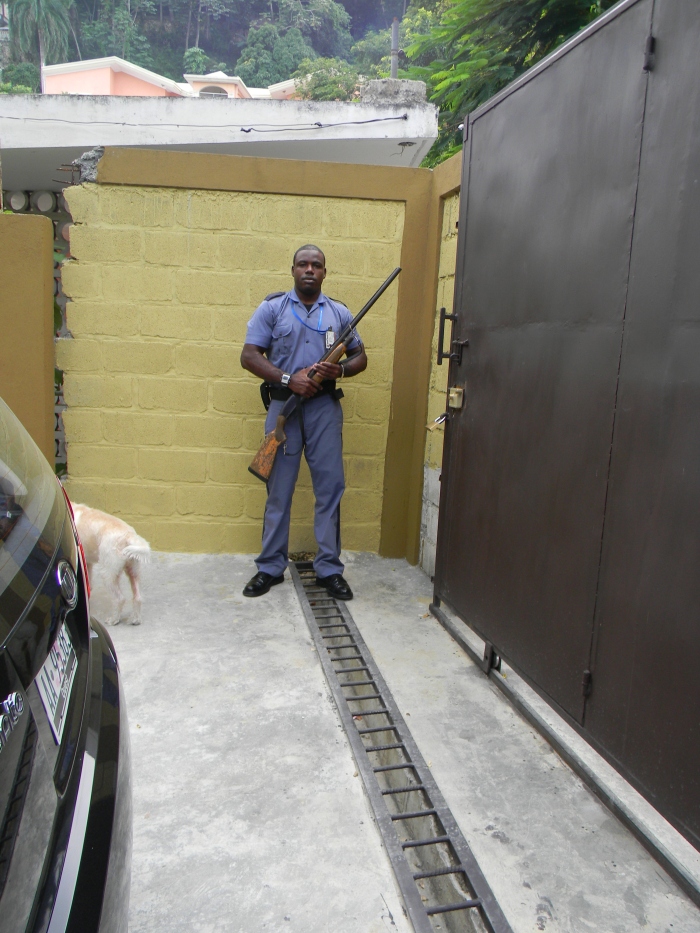 Jean-Jean, my favorite guard, just inside our gate

Technically, I was not supposed to leave the house alone and, certainly, not on foot.  When we traveled by car, we were instructed to drive with the windows up, doors locked, and seat belts on—making it more difficult to be pulled from the car in the event of an attempted kidnapping.   (To read my post about this click here.)

My point to Sara is this:

I was stuck at home a lot.  At the very least, staying home became a habit.  And now that we’re back home in the US, I tend to forget that getting out can be, of all things, kind of fun.

Sara insists, however, that I’ve always been this way—that Haiti has nothing to do with my ongoing, sticking-close-to-home habit—and that I’m only getting worse.

I’m what I insisted I would never be–an actual old maid—forgetting my own nephew’s names, not hearing quite as well, reading glasses, a must–that is, if applying lipstick to the lips and not the nose remains an option.   (Surely an old maid can retain an ever-so-slim trace of vanity.)

Old age has surprisingly caught up with me.  But, how did I get here?  It’s like I went to bed and woke up embodying the spinster stereotype–widening waist and spreading hips.

(Actually, I don’t know how this whole old-maid-thing works in an age of gay marriage.  But since I live in a state where marrying my partner is still not a legal option—since I’ve never been married, have no children—unless dogs count—and am fast approaching 50, I think I fit the bill.)

Like many, I played the Old Maid game when I was a kid, but I never dreamt I’d actually become one.

Maybe on some unconscious level I love the irony of matching pairs in a game whose focus is the aging woman left alone.  I don’t know.

I may not be Susan Boyle—a woman of a certain age—amazing voice—never kissed—but the more I think about it, the more I meditate on my fast-approaching status as a geriatric—AARP card and all—the more I realize I’m becoming (Sara not withstanding) stark-ravingly, maddeningly “old maid.”

So, step back younger women.

I am spinster.  Hear me roar.

How do you notice yourself aging?  Does it surprise you?