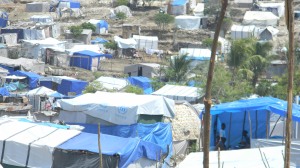 No water has flowed from the faucets at my house here in Haiti for 2 days, and I’ve decided not having water is way worse than not having electricity.

Bottom line:  I’m not a happy camper—or at least—not happy camping, as the case may be.

At the same rate, I must confess, to living a ridiculously comfortable life here in Port-au-Prince, certainly by Haitian standards.  So, I have no real reason to complain, especially when one considers the more pressing crisis of cholera contaminating the water supply, an epidemic that has killed nearly 1000 in the past few weeks, sickened nearly 20 times as many, and incited violence against UN peacekeepers in a number of towns across the country.

It’s mostly a matter of not having what I’ve come to expect after more than four decades of running water’s near perpetual availability.  To say I’m spoiled would be both true and minimizing of just how comfortable, on some level, I think I’m entitled to be—an ugly truth, I don’t totally know how to change about myself.  Perhaps, doing without is the only way to train myself otherwise.  And it seems it may indeed be a matter of training, relearning how to think about the resources in America we so casually take for granted, waste, complain about, and even don’t know how to survive without when shortages arise.

Frankly, I’m embarrassed, after living in Haiti for a number of months, to come from a country that plays survivor games on television (to the appeal of mass audiences), calling that “reality” TV.   But the sense of entitlement I’m uncovering in myself is exponentially more shameful.

After a chronic illness left me unable to work for a number of years, I’d come to consider myself fairly self-aware, someone who thought about poverty and hunger and wanted to do something to alleviate suffering.  But, too much thinking coupled with not-enough acting, can clearly translate into an hypocrisy I and too many Americans, both liberal and conservative alike, unknowingly live by.

Certainly, I don’t have the answers, not even for myself.  I only know that by the time this piece posts, it’s likely water will again be flowing in my house and complacency will become even easier, once more.  I can only pray that my attitude improves, that I learn to do with less, that I complain less about the little things and do as Ghandi said we should, “Be the change you want to see in the world.”

If only I knew how!