Up until the last minute I didn’t believe it would happen. Even as we were on our way to Jean-Claude Duvalier’s home in the hills outside Port-au-Prince, my friend Kate (my ally in this effort) and I didn’t know what to expect or where we would rendezvous with Richard, who claimed to be Duvalier’s friend and had set up the “interview.”  The road was dark, as we wound our way up the mountain to encounter God only knew what.

It all started soon after Baby Doc’s unexpected return to Haiti in January.  I had asked Richard, who, in fact, directs the security operation in Haiti for Sara’s NGO, if I could go to the Karibe Hotel in Petion-ville, where Duvalier was staying, as we had to clear any out-of-the-ordinary outing with Richard’s team.  Security in Haiti is that precarious and risk-management is essential to the functioning of the NGO in potentially unsafe situations.   I wanted to attend a press conference Baby Doc was supposed to hold there on his second day back in the country.  Inevitably the event was delayed for a number of days first because the Karibe indicated it could not manage the number of press expected to attend and then by the eventual arrest of Duvalier on his third day back.

When I made the request, Richard, whose father had been a Haitian ambassador to France during the Duvalier era, surprised me, asking if I, in fact, wanted to meet Baby Doc.  At the time, I knew Richard’s father had been a diplomat, but I didn’t know when or for whom, and though I said I certainly I’d like to meet the man, I never expected it could or would happen.  Ultimately circumstances prevented me from attending the press conference which was held after the ex-dictator left the Karibe and was staying in a guest house on Montagne Noir.

I never again mentioned meeting Baby Doc to Richard, as, first, I had no real ambition of meeting a man who had allegedly committed crimes against humanity and, second, I knew Katie Couric herself would have loved to interview the former president.  I never expected it could be arranged for an unknown writer from Kentucky like me.

That is until this past Wednesday evening, when Richard approached me at my partner Sara’s going away party.  (We moved home to the US on Monday after a year in Haiti, where Sara directed the initial phase of an international NGO’s relief effort.)

“Would you still like to meet Baby Doc?” Richard asked at the barbeque, as I sat by the pool, minding my own business, admiring the setting’s breath-taking view of Port-au-Prince: 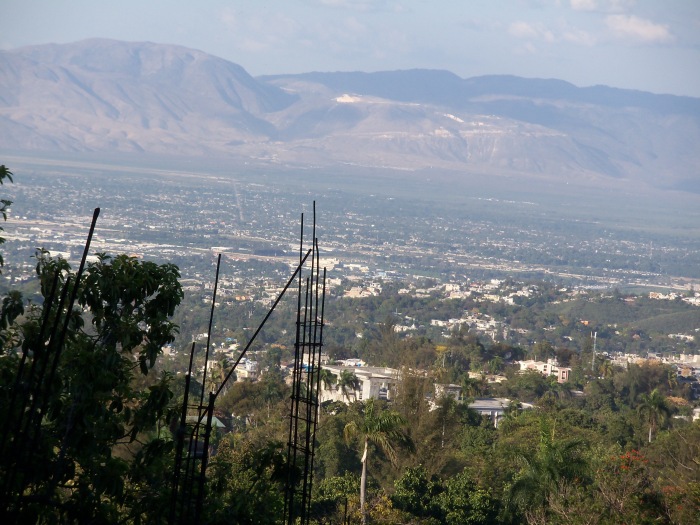 “Of course,” I stuttered, surprised by the question, imagining Richard was just making friendly conversation and couldn’t really make that happen.

“Then I’ll arrange it,” he asserted, turning to answer his phone.

And I laughed to Sara who was standing nearby, “Do you really think he can make that happen?”

“I don’t know, but I certainly don’t want to go,” she insisted.

She asserted the same, when Richard called the next day to announce the meeting had been arranged, “They’re expecting us Saturday evening.”

“Good God,” I said, having won the “Stylish Blogger” award, “What does one wear to meet a former dictator?”

37 thoughts on “What Does One Wear to Meet a Former Dictator?”