It’s been six days since I interviewed Baby Doc and I am still reeling—whirl-winded by the sheer size of the experience, the weight, the scope of opportunity that came so unexpectedly. 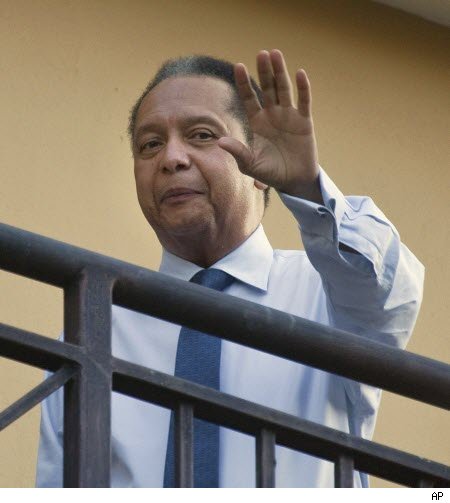 And, frankly, I’ve not digested the experience yet— it seems to have exhausted me; I feel depleted–confused by having almost “liked” the version of Duvalier I met that night.  What does one do with that realization?

Quite frankly I wish I were back in Haiti now.

Certainly, I love our home in Lexington and enjoy seeing Sara’s happiness at being here, but I would do anything to be in Port-au-Prince when Aristide arrives.  The plane to return him from exile has already left South Africa; he’s expected to arrive in Haiti within hours.

But if I had to identify one overwhelming response to meeting Jean-Claude Duvalier, it would be this—a bit of dismay at how intrigued I still am by him—not Baby Doc the dictator, but Baby Doc the man, the details of ordinary around him.

The fact that his house, though perhaps the grandest on his street, was not as spectacular as I had suspected it would be.  The couches in the living room seemed old and worn.  There were no fancy fixtures.  The wrought iron chairs on the patio needed paint.

But then again, that’s what we all amount to in the end—the peeling paint, the nicks, the scars.  The couches need recovering.

The bottom line is this:  the story of Haiti is largely one of exile and variations on that theme—coerced comings and goings, arriving unwillingly on a tiny island, you then don’t want to leave.

So it was for the slaves the Europeans brought from Africa, and so it was for Jean-Claude Duvalier, made president for life at age 19 when his father died, a job he didn’t want, a role he didn’t want to play.  He ruled for 15 years, was exiled for 25, and has finally come home to Haiti again.

And in some ways, so it is for Sara and me.  Though we came willingly to Haiti, we were not at all ready to leave, and having left feels like a loss, an amputation.  Haiti is the phantom limb, the one I dream about, the one that calls to me at night.

Eventually we all get kicked off one island or another.  A tribal council is convened.  The votes are cast.

And someone has to go–