A story like mine means little without documentation.  Anyone can claim their daddy danced in the underworld that is organized crime.  Few have actually lived it.

The fact of the matter is–fiction only goes so far.

Somehow there’s power in knowing a story played itself out in an actual, personal past—an experience rooted in real-time, a specific place.

Admittedly, my story is complicated.   In fact, that may be an understatement.  I’ve lived a life many parts of which could make a powerful story, a moving memoir, in and of themselves.  One could write one book about growing up in the Mafia, another about battling bipolar disorder, a third about living in Vietnam, and a fourth about being dropped, with two dogs, in post-earthquake Haiti.

The bottom line is this.  There’s a lot going on here.  The broad range of story itself is borderline bizarre.  Sometimes I almost have trouble believing the narrative I myself have lived.

But I believe God has gifted me with a story to tell.  The life I’ve lived, no matter how difficult, has been my greatest gift.  Perhaps, that’s what makes me a writer–feeling the story itself could be a gift.

Living it is one thing.  Believing it as an outsider is, perhaps, another.  It sounds a bit far-fetched.  Even I know that.

Today, then, I thought I’d share links to two articles published in 1972, one by The Pittsburgh Press, the other by ThePittsburgh Post-Gazette, that document my father’s involvement in the Pittsburgh underworld.

For the trial described in the links below, my father was granted immunity—but only after massive coercion on the part of federal prosecutors.  According to my mother, my dad faced imprisonment unless or until he talked, so somehow he decided to come clean, in a sideways kind of way.  I think of it in terms of the Emily Dickinson line, “Tell all the truth but tell it slant.”

I suspect, but don’t know for sure, that there had to be a decision made among those indicted and the Mafia leadership that this was their best strategy—inevitable—and, perhaps, in their best interest.  I’m almost certain there was never a rift between Daddy and his Mafia associates because of this.

For example, I remember my parents, on a number of occasions, driving to the federal, minimum security prison in Allentown, Pennsylvania (on the other side of the state) to visit those who were actually convicted and serving time there.  It also seemed to me my father carried on the “business” in their absence.

You will read, then, in these articles about my father’s role as the prosecution’s prime witness in the case.

I was eight-year-old when, in this case, the raids by the FBI took place—ten-years-old at the time of this particular trial.  I try to imagine what I might have felt about all of this at the time, as, frankly, I remember nothing about the weeks the testimony itself took place. 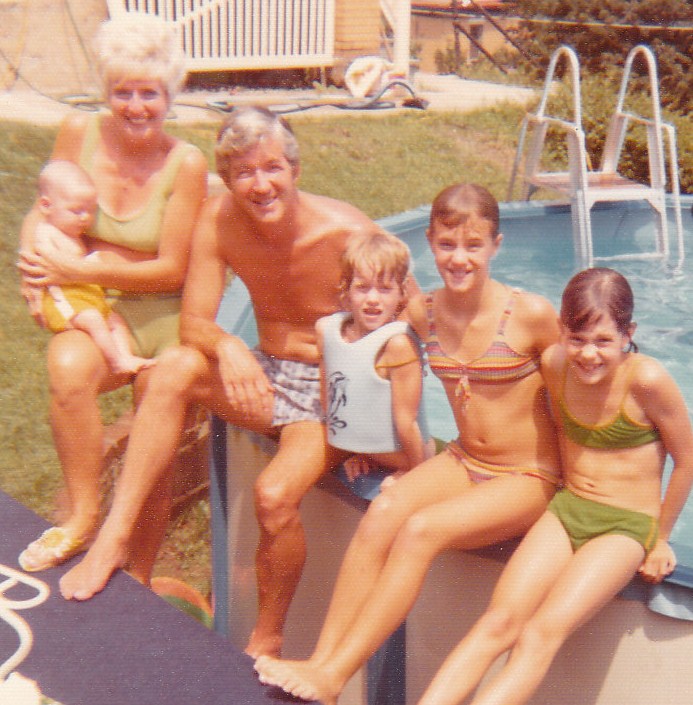 My family one year later in 1973. I am second from the right, the oldest of 4 siblings.

How is it that this was my father’s life, and by extension, mine?  How might events like this, happening over and over to any child, have impacted her in the long run?  Might it have affected my mental health in years to come?  Is there a link between this childhood and my later developing bipolar disorder?

These are some of the questions I’m driven to answer.

What questions do you have?