I will forever associate spring with an up-close-and-personal encounter with crazy, with losing my mind in an over-the-top kind of way.   And, indeed, my March Madness of 1990 ended life as I knew it.

Spring brings many forms of madness.

A university writing instructor, I was suffering through what should have been a relaxing spring break, when I began to crumble. In Oklahoma the branches were barely budding, when I started obsessing over trees and their ability to lead me elsewhere, wherever there was. I imagined it was a dimension parallel to the world around me. 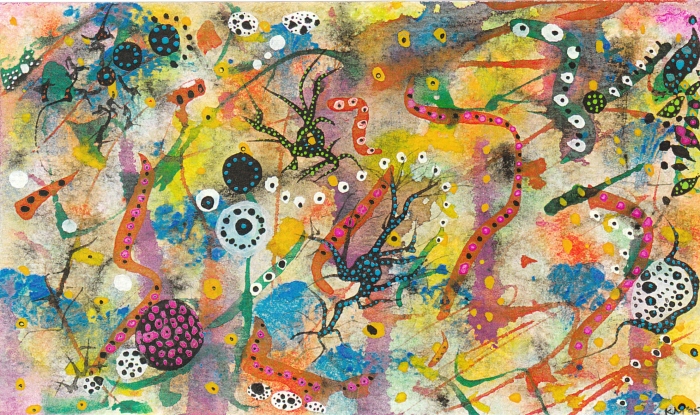 I wanted desperately to go there, and it was that longing that ached me into action. It muscled me forward, compelling me to bring bare branches indoors and decorate my walls with them. (I kid you not.)  It seemed I was suddenly and acutely aware, as the sculptural quality of those limbs stunned and spoke to me.

In my mind, bringing bare branches inside was a sacramental action—an effort to access a reality stripped of ordinary distraction—the holy hollow at the center of everything, a sacred space.

At the center of everything–

However, in addition to this, I felt compelled to tear up the carpet in my RENTAL apartment’s living room, to access the concrete beneath—a more solid surface on which to stand.

So I stayed up all night, utility-knifed my carpet into carry-able strips, stood a ladder beside the dumpster, climbed rung upon rung in my high-top Reebocs, and deposited my former floor within.

A rug literally ripped out from under me, I was hospitalized the next day at a psychiatric facility, where I walked the halls and fingered the walls for weeks, as all around me reality bloomed into branches, a dazzling display of what OTHERS called crazy.

A dazzling display of crazy–

I don’t remember arriving at Parkside Hospital in Tulsa, Oklahoma; neither do I recall anything about the admissions process.  I don’t remember how my dog came to be kenneled at the vet’s office, who took me to the hospital. I only know my therapist admitted me there following an appointment with her the morning after that carpet removal.

Indeed, it’s these gaps in memory that I remember most, the fact of forgetting, the empty space where the story should be—gaps  I fill in and flesh out with details recorded in the journals I kept.  For example, the night I so unceremoniously removed the carpet from my living room, the night before the hospital admission, I described an intense sense of alienation and confusion, described myself as feeling “marginal—near the edge and falling off.”

Near the edge and falling off–

I DO remember, however, that Parkside Hospital had three floors.

I was admitted to the third, the unit that was locked and most restricted.  I remember a day room at one end, dormitory style rooms at the other, and a hallway connecting the two.

With windows along two walls, the day room was large, filled with wooden tables and chairs, where we patients spent most of our time:  played games, watched television, ate meals.

The dorms, where we slept, were bare and barrack-like, and bathrooms, one per room, boasted a toilet and shower stall, as well as a sink with metal mirror above—no glass allowed, lest patients break it and purposefully injure themselves.

Behind the nurse’s station was another hall that was locked and off-limits to patients.  Here were a number of seclusion rooms, each with a single bed bolted to the floor in the center—each equipped with 4 point restraints—wide leather cuffs that strapped wrists and ankles to the bed.

But I walked the hall between those dorms and day room, repeatedly, regularly.  The antipsychotic medication made me restless, so I paced, feeling the walls with my palms, an effort to comfort myself, to calm the cacophony of crazy that worsened every evening.

One nurse was kind and sometimes walked with me, reassuring and lessening the aloneness, as I tried to quiet the chatter in my head, the echo of children’s voices saying senseless, sing-song rhymes.

a dizzying sing-song of children’s voices–

But mostly I walked that hall alone, alternately fighting and forgetting a psychosis that whiplashed between extremes of nothingness and nowhere.

This whiplashing made me acutely aware of my own nothingness, the fact that at the center of myself a huge hole swallowed and indeed devoured all I thought I knew about myself and the world around me.

The world around me a vacuum—nothing but emptiness sucking.

I was not who I thought I was. 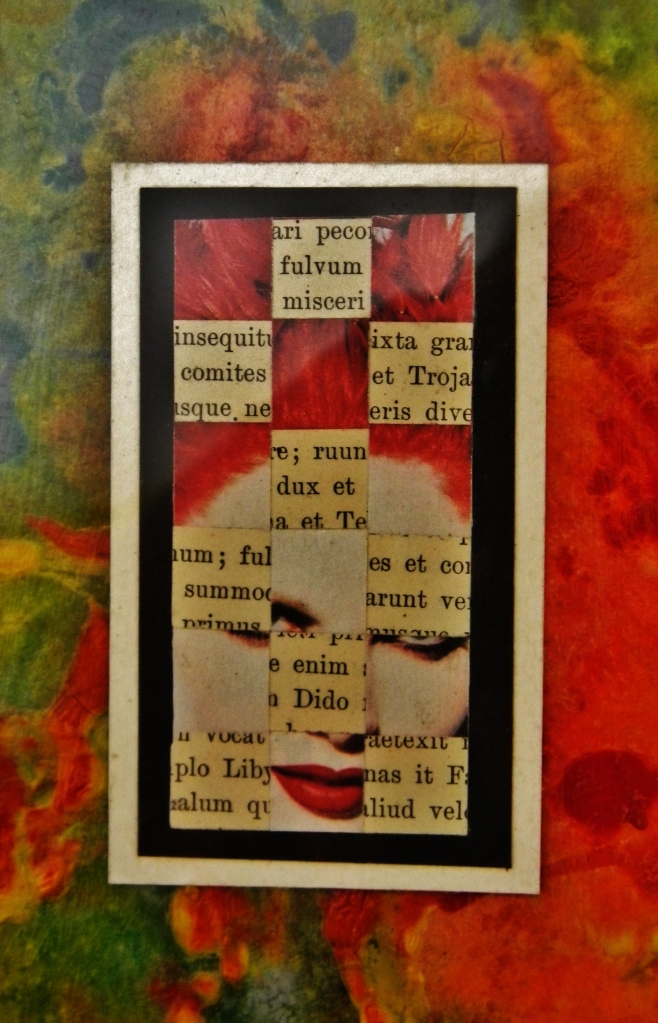 Not who I thought I was–

Stripped of all substance, of all that seemed solid and predictable, I felt naked. I felt like I was drowning. I felt bare to the glare of what others called crazy.

If, indeed, I was out of touch with reality, as doctors had told me, what did that mean?  And if I couldn’t trust my own mind, what could I trust?

What could I trust?

Inevitably, this possibility, that I couldn’t or shouldn’t trust myself terrified me. So it seems to me, now at least, that I displaced that fear in all directions, becoming terrified of everything and, at the same time, terrified of nothing I could clearly identify. I was always overcome with dread, knowing only that some nameless but looming something was terribly wrong.

As I look back on it now, I imagine I wanted out, but not so much out of the hospital, as out my own mind, a mind that was no longer an asylum in its own right.  As Anne Sexton said:

I am in my own mind,

I am locked in the wrong house.  (“For the Year of the Insane”)

So in the end, it was terror that made me walk that hospital hall–alone in the most existential sense. Exiled not only from the rest of the world by mental illness, but exiled by psychosis from myself.

It was the ultimate seclusion room.

In fact, that is the terror of psychiatric illness—a terror from which it took time to recover.

Indeed, I was ill for a very long while, and recovery was slow, agonizingly slow.

I emerged only gradually from that ruin.  Having forgotten what sanity looked like, I barely recognized its image in the mirror.  Backward and upside down at first, it slowly righted itself, turning me around to face the world again,.

Ultimately now, two decade later, I’m grateful for that process of unbecoming and the evolution that’s remade me over the years.

You see, eventually I learned to negotiate that divide. Eventually, I mapped that gap between crazy and a reality the rest of you know. Gradually, I’ve grown grateful for those visits to the far side of sanity and slow slog back again—grateful, above all, twenty years later, for who I was, and who I’ve, also, become.

Life sometimes stuns me now, especially the more I realize one important fact, that those of us who struggle with psychiatric illnesses, those of us who are, not so much DISabled as OTHERLY abled, WE make the world not less but more. WE make this planet a richer place, one where we, too, can live and love.  Like you, we hope big hopes.  We dream enduring dreams.

Do you know anyone who struggles with mental illness?  Will you share my story with others?  Only the telling of tales like mine will reduce the stigma associated with psychiatric illness.

During the month of May, Mental Health Awareness Month, please remember the struggles faced by folks with mental illness.  Please donate to NAMI, the National Alliance for the Mentally Ill.  Share stories like mine with those you love, and encourage others to talk, write, and blog about their own battles (using the hashtag #mentalhmonth2014).  Let those who live with mental illness (and their families) know they’re not alone.

Note:  All art in this post is my own.  I posted an earlier version of this essay on my blog several years back, and it was published in the Lexington Herald Leader three years ago.

175 thoughts on “Leaving the Seclusion Room: A Journey to the Far Side of Sanity and Back Again”