When I was growing up, my family lived with the near constant threat that our phones were tapped.

This was a plain and simple fact of life following the 1970 Organized Crime Control Act, the law that allowed federal prosecutors to, for the first time, legally tap the phones of mafia bosses, as long as a court agreed enough evidence existed to warrant that violation of privacy.

What ultimately began to bring down the mafia’s illegal gambling operation in western Pennsylvania was not the shredded remains of once-soggy gambling documents (lodged in a garbage disposal prosecutors dragged into evidence in May 1973), but the determination of Nixon administration US attorneys,  such as Dick Thornburgh, and their new-found ability to eaves drop on private telephone calls. 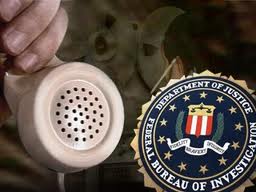 In his 2010 autobiography Where the Evidence Leads, Thornburgh says the following about his wiretap successes in the early 70s, especially as they relate to my father’s boss, the man he was caught locked in a room with on November 21, 1970, when 100 federal agents raided 22 Pittsburgh locations:

The first successful wiretaps in western Pennsylvania helped bring down the massive sports-gambling operation of Robert “Bobby I” Iannelli.  After accumulating sufficient wiretap evidence, over 100 FBI agents staged a series of raids on twenty-two suspected gambling locations on November 21, 1970, seizing gambling records and paraphernalia.  This action sent shock waves through the illegal-gambling community, which had thought only interstate activities were within the reach of federal investigators.

The evidence gathered in the raids was presented, and an indictment was returned against Iannelli and twenty-five others on federal gambling charges.  All were subsequently convicted.  We had struck out first effective blow at the rackets.  (43-44)

Though our house was one of those raided in 1970, I have only vague recollections of being shut in my room, while that raid was underway—sitting on my bed, leaning against the wall, worrying, someone coming in to reassure me that everything would be okay.

What I remember more clearly and wrote about in my journal at the time, was a raid carried out in 1977.  On February 10, while my parents were in Florida and I was at school, FBI agents raided out house in Pittsburgh.  That evening I wrote a rough outline of what happened in my diary:

I found out that my dad had been indicted by the Grand Jury.  The FBI had been at our house today.  [My parents] said it would probably be on the news and in the newspapers.  I was really upset and I cried.  This means my dad might have to go to jail.  I watched the news on one channel.  They [mentioned] it and showed Joe Iannelli.  I don’t think they mentioned my dad, but I don’t know about the other channels.  I’m sure it will be in the papers.  A lot of people called this evening. . . . I couldn’t keep from telling Sis what happened since I started to cry and she wanted to know the problem. 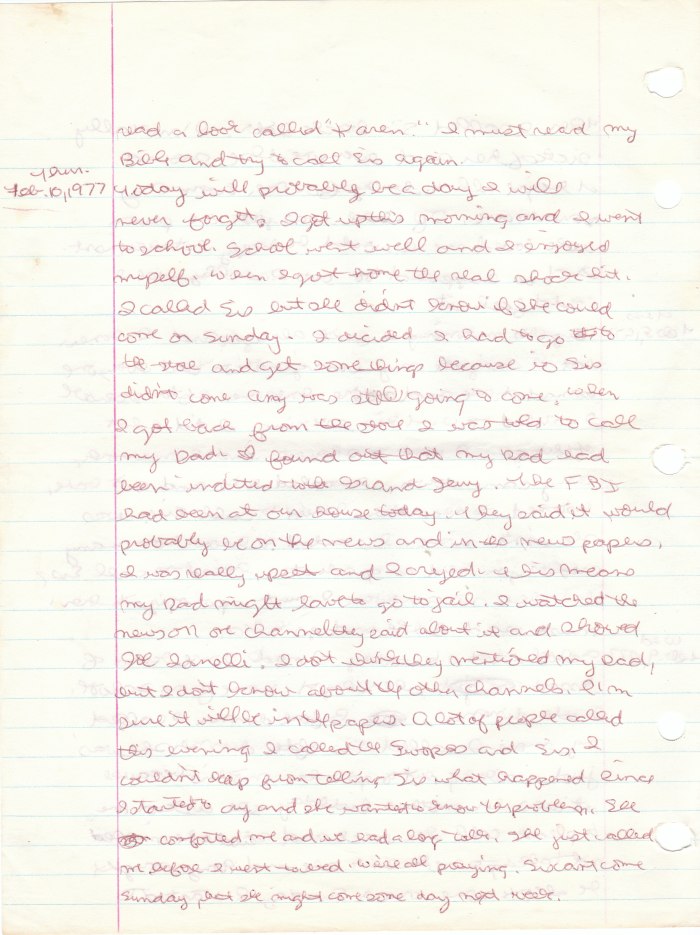 The following day I noted in my diary that there had been articles in the local papers, and on Saturday, February 12th I wrote, “I talked to Bruce.  He saw an article about Daddy in the Pittsburgh Press.  He said not to worry.”

I’ve not been able to track down that article online, but I did find one from the newspaper of nearby Lebanon, Pennsylvania on February 11th.   Called “Indict 12 on Gambling,” it read in part:

A federal grand jury indicted 12 persons on charges of conspiracy and operating an illegal gambling business in Allegheny County.

Federal officials estimated the alleged gambling business took in $15 million annually in the county from September 1974 to February 1977.

If convicted the defendants would face up to 10 years imprisonment and $30,000 fine.

I remember sitting in my dad’s desk chair the night of February 10th, struggling with what I should or shouldn’t say on the phone—aware that the lines were likely tapped at that very moment.  Spinning myself round and round in that chair, the long phone cord coiled around me.  The more I talked to my friend Sis about what had happened that day, the more I saw myself trapped and in trouble—terrified that I might, one day, hear my own words played back at me in court, terrified that what I said might indict my daddy.

Though that night was four years after my father found himself on the witness stand in 1973, what seems more ironic to me (knowing that Dick Thornburgh the US Attorney for western Pennsylvania under the Nixon administration remains proud, even now 40 years later, for the role wiretapping played in those indictments and subsequent convictions) is the nearly concurrent illegal wiretapping the administration carried out on the Democratic National Committee at the Watergate Office Complex in Washington, D.C.

I said in a post last week that, like people, the past is never all one way, never all good or all bad.  But most Americans would agree that Nixon’s actions during Watergate were nowhere near legal—let alone morally justified.  It’s no wonder to me now that, as I child, I confused the good guys and the bad guys, found it difficult to untangle right from wrong.  If the very administration indicting my dad was legally using wiretaps to accomplish that, while simultaneously using them illegally to win reelection, how did I as an 8 or 10 year-old stand a chance?

There’s a delicate line between right and wrong—an uneasy balance between criminals and their less-than-virtuous counterparts, running the government that indicts and convicts the former of wrong-doing.

Who was the enemy of the people—my dad taking illegal bets to support his family or the president of the United States happy to hedge his own, unwilling to leave his reelection fate in the hands of American voters.  What was the real threat to democracy—the more onerous enemy of freedom?

No wonder I was confused as a child—fearful that my own words spoken on a presumably private telephone could be used to indict my daddy.

Would the real criminal please stand up?

35 thoughts on “Would the Real Criminal Please Stand up? (My Dad, the FBI, and some Mafia for Good Measure)”