Clearly crime runs deep in the DNA.  My dad, indicted by a number of grand juries, had his ties with the mafia, but I’ve had an experience or two with crime of another kind.

When Sara and I lived in both Haiti and Vietnam, we were blessed to have our dogs with us.

I know most folks don’t traipse the planet, canine companions in tow, but Sara and I, for whatever reason, see fit to move our mutts to whichever corner of the globe is hosting the latest in earth-shaking disasters.

However, transporting pets to unlikely international destinations sometimes devolves into canine trafficking of the comic kind.

(Yes, I’ve shared this story before, but it bears repeating in this current criminal context.)

It even started off badly—when Sara’s father dropped Ralph and I at the airport in Lexington with a crate that proved to be, after meticulous measuring by an airline employee (measuring that took over an hour, I might add) one inch too big—one inch too large for the smallish regional jet we were taking to Detroit—the first leg of our journey to Hanoi.

I wasn’t happy to hear this.  I wasn’t happy at all to wait two full days till we could be rebooked and Ralph could be re-crated in a kennel a mere sand-papering would have made small enough in the first place.  But I remained calm.  I went home, over-sized crate in tow, and waited. 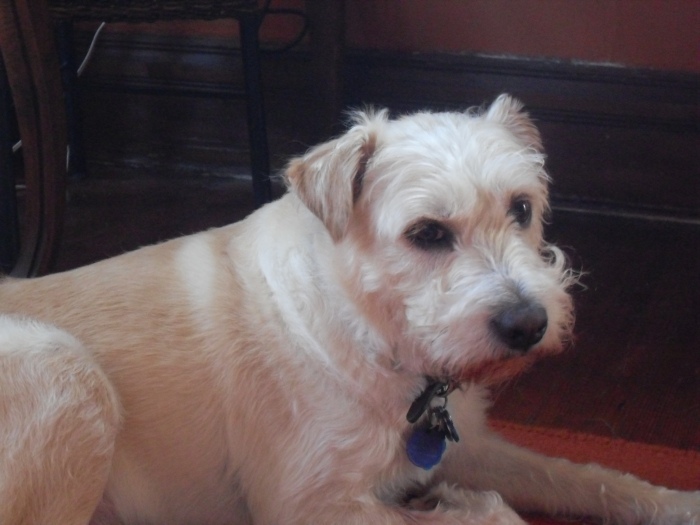 Ralph, waiting in Lexington--"Will I ever get to leave?"

An additional hundred dollars poorer but an appropriately-sized kennel richer—we were back at the airport, Sara’s father supervising the once more meticulous measuring, me hyperventilating in the corner, afraid I’d be another two days’ waiting.

But we passed inspection.  Ralph was loaded.  I tried to relax, knowing the 27 hour flight to Hanoi can be exhausting.  But things went well, with me checking at each layover to be sure Ralph was transferred to the next plane and ready for the next leg of a very long trip.  Things continued to go well—

In Seoul, I again checked on Ralph upon arrival and was assured by a Korean Airline employee that he was well and would be transferred for the trip to Hanoi.

So I did what any American, living in a country with no western fast food besides Kentucky Fried Chicken, would do—I went to Burger King for my last supper of Whopper and fries, knowing it would be at least another 90 days and a second resurrection of Christ before I’d eat another meal with equal amounts of artery-clogging cholesterol and heart-stopping good taste.

Two hours later and that much closer to an early grave, I waited at the gate to board the flight to Hanoi.  I was exhausted, relieved to hear, “At this time we would like to begin boarding Koran Air flight . . .” and only a little alarmed when an airline representative began paging someone whose name vaguely resembled my own.

Having dragged my baggage though a maze of travel-weary passengers, I was told, “Madam, you not go on this flight.”

“Excuse me?”  Surely I had misheard.  South Koreans’ speaking English could sometimes be hard for me to understand.  “Could you repeat that?” I apologized.  I had been traveling for twenty-two hours; I wasn’t processing well.

“Dog not go on this plane.”

“No room for dog on this flight.”

“But we’ve had this reservation for weeks.  There must be some mistake.”

Eventually I understood, though I never fully understood why,

–that we could not leave that night,

–that there were no more flights to Hanoi before morning,

–that we might not be able to go even then (there were no guarantees),

–that the airline would bring Ralph to me,

–that I could go to an hotel,

–that Ralph could not.

Floating somewhere near the ceiling, looking down on this silly woman in the ridiculous Asian airport misadventure, I realized this was not a good situation.  I realized the woman might be close to losing it.

I still hadn’t gotten Sara on the phone and knew that by then she had already left for the airport in Hanoi (translator in tow) ready to meet the quarantine official, whose “special fee” she’d pay to compensate for our late night arrival and the overtime he’d work to process Ralph’s entry into Vietnam without incident.

To make an excruciatingly long and less-than-pleasant story a bit shorter, I should mention the follow facts:

–I ultimately did get Sara on the phone.  Sara paid the official’s special fee (since, of course, it wasn’t his fault we didn’t arrive) and arranged to meet him again the next day, when, of course, there would also be an extra fee, since it would be Tuesday and there is always a special fee on Tuesdays.

–Forbidden by airport officials to remove Ralph from the crate he had already occupied for more than twenty hours, I pushed his perfectly-sized kennel around the airport all night on a luggage cart, telling myself repeatedly that if only  I got through the next ten hours, I would be able to take just about anything.

I should have known it would be challenging:  taking a 40 pound, blonde terrier to Vietnam, where the meat of medium-sized, light-skinned canines is still considered a delicacy. 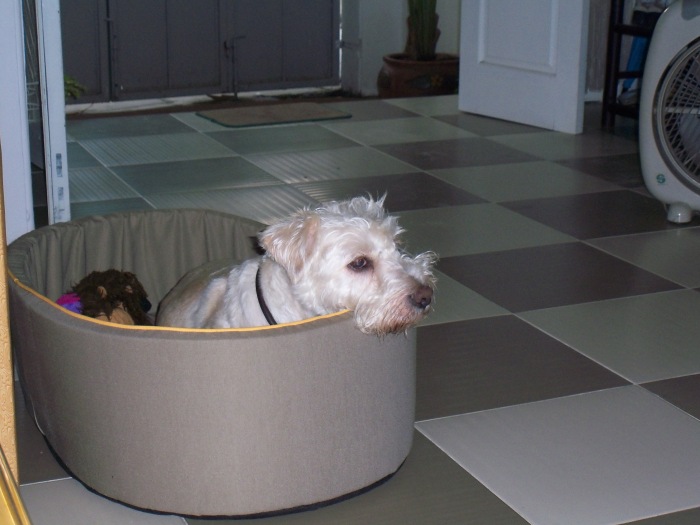 Ralph, relaxing after his long trip to Vietnam

And though it ended well, concluded with Ralph arriving uneaten in Hanoi, it proved so crazy-making along the way, I “sanely” decided to take him to Haiti the following summer.

However, that trip proved less eventful—except for his traveling companions on the flight from Miami to Port-au-Prince—the 10,000 chicks he hasn’t stopped chirping about since.

That, he insists, was my truer crime against his canine kind.

42 thoughts on “The International Trafficking of Canines: Crime of the Comic Kind”