My love affair with school started early on.  In fact, the infatuation was already firmly established by the time I enrolled in kindergarten and may well have begun when I was merely a toddler attending Sunday school.  I simply adored any gathering that called for the manipulation of paper products and had a teacher in charge.

(I still do, for that matter.)

In this regard, kindergarten was a Kathy-dream-come-true—a paper paradise where notebooks and newsprint played ring-around-the-rosy with cardstock and construction paper.  It paved the way, even, for a love affair with vellum in later years.

(I was decidedly a crafter in the making.)

But kindergarten had other kids to keep me company, other kids with whom I painted and played—a perfect storm, when it came to establishing my school-ish ways. 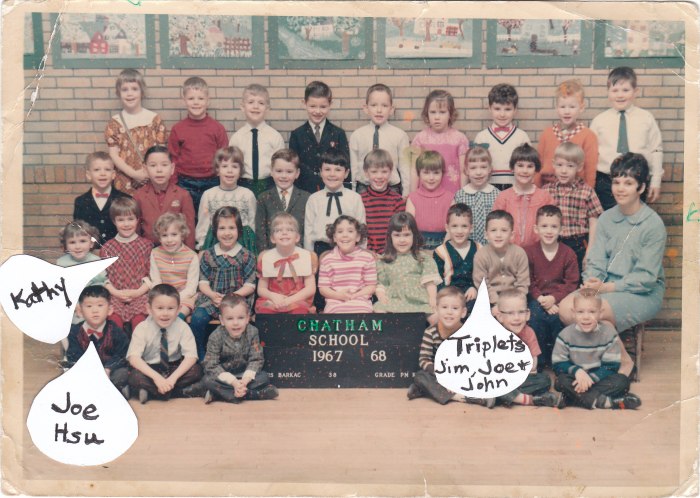 My best friends in kindergarten were identical triplets Jim, Joe, and John.  With them I loved to draw, to make dark marks on clean sheets of manilla paper, imitating the way they colored houses, smoke spiraling from the chimneys.

What struck me most about these boys, however, was not that they looked identical, but the fact that they rode the school bus—seemingly the only kids in the class that did.  I remember Mrs. Steele escorting the boys to the bus in the afternoons, coming to our room at the end of the day, consulting an important-looking paper, asking if the “triplets” were ready.  For the longest time I thought “triplets” were what you were called if you rode the bus. I focused on the only part of that word I recognized—“trip.”  These boys were definitely going places, and, it seemed to me, that Mrs. Steele’s piece of paper indicated as much.

But what was most firmly established in kindergarten, even more so than my vocabulary challenges or fascination with paper products, was my undying allegiance to the underdog—a willingness, a compulsion even, to stand alone in support of the one kid in class the others mocked and made fun of—ridiculed and scorned.  This behavior, I simply would not tolerate—it, I absolutely abhorred, even from the age of five, especially when a kid couldn’t defend himself.

In the case of Joe Hsu, my loyalty was fierce.

I know now, given it was the late 1960s, that Joe was likely Vietnamese—a refugee who was only just beginning to learn the language—as other children not only made fun of the way he looked but the way he talked, as well.  Having recently spent a year living in Vietnam and reading a number of memoirs written by those who fled the war, I know now that new arrivals often adopted common American names in an effort to assimilate more easily.  Thus, my friend identified himself as “Joseph” Hsu.

I remember being so appalled by the other kids’ mistreatment of Joe, that I persuaded my mother to help me make cookies for him.  I wanted him to feel welcome and less alone.  I remember that we made a tray of blonde brownies and drove to his home, a row house, on the right side of East Street.  I remember that he had several older sisters who were taking care of him that Saturday, that when we arrived he was dressed only in his underwear.

I remember that Joe was happy to have the cookies, that he even wrote me a thank you note saying so.

And to the degree that kindergarten was about my love affair with paper, it’s significant to note that the only item I still retain from 1968 is a piece of paper from Joe Hsu expressing his appreciation:

It’s this important paper I cherish now the most.

(Note:  If you are new to my blog, you might like to know that I am writing a memoir and blogging about growing up in an organized crime family.  This post is part of that story.  To read “Kids Make the Best Bookies,” click here.  If you are interested in reading any of my protected posts, please email me at kownroom@yahoo.com  or let me know in the comments below, and I will gladly share the password with you.)

41 thoughts on “Kindergarten: A Lasting Love Affair with School and all things Paper-Related”