It’s because of these friends that this week is special, as Minh, one of Sara’s colleagues, is coming to visit us in Kentucky for a number of days.

The deputy national director of Habitat for Humanity in Vietnam, Minh lives with his wife and toddler son in Da Nang–the third largest city in the country, located along the coast half way between Ho Chi Minh City to the south and Hanoi in the far north.

Minh’s arrival in Lexington is an opportunity for us to renew our friendship, a chance for Minh to see the work Habitat for Humanity is doing here in Kentucky, and a reason for me to revisit Vietnam in my blog–sharing today about Habitat for Humanity’s work in Rach Gia, and in the days to come to write about other projects the NGO has undertaken in a country we dearly love.

So in honor of Minh’s arrival, let me share today about a Habitat for Humanity building project I volunteered with in the far southwestern tip of Vietnam.

When Sara and I were living in what was once Saigon, now Ho Chi Minh City, we flew in a propeller plane even further south, where we visited a poverty housing project about an hour and a half drive into the rice patties outside of Rach Gia.

The city of Rach Gia itself is the capital of Kien Giang Province on the far southwest coast of Vietnam along the Gulf of Thailand.  Once part of Cambodia, Rach Gia has a large Khmer population which fled their homeland during the brutal Khmer Rouge Regime.  The Khmer exiled in Rach Gia live largely without political rights in Vietnam,  an especially impoverished population in this part of the country.

It was Habitat for Humanity’s work with this exiled group that took us to Rach Gia in the first place and the context in which the photos that follow were taken.

After a light breakfast of fried egg, baguette, and Vietnamese iced coffee sweetened with condensed milk,, we drove in an air-conditioned and over-sized SUV about 45 kilometers out into the rice patties so common in this part of Vietnam.

I had never before seen this kind of landscape up close and in person–the brilliant, blue sky against the living, breathing green of the rice patties themselves.  But what struck me more than this overwhelming of emerald, this bigness of blue, were the conical hats of local mothers bent under a glaring sun, tending the crop that feeds this nation of now 88 million–and the smiling faces of their children, too young to understand the implications of poverty or appreciate the inadequate shelter provided by their grass-woven homes–houses unable to stand up against the wind and water of typhoons, the breaking shaking of earthquakes common in the south Pacific ring of fire.  (Click on images to enlarge.) 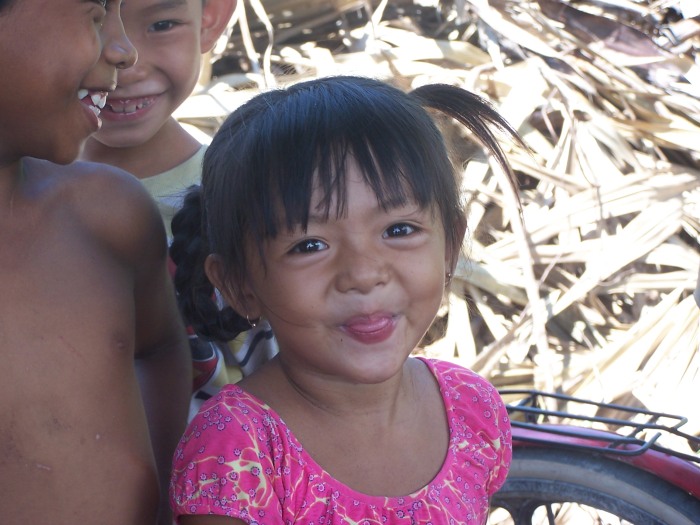 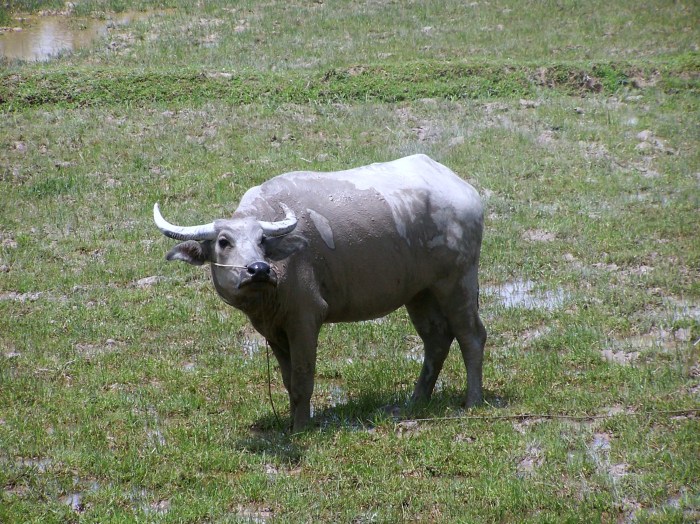 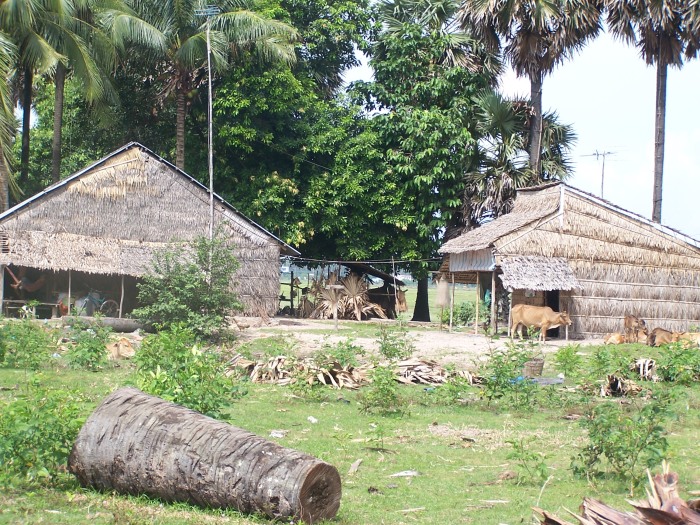 A "shelter" that is grass--

Volunteers from Holcim Cement Company in Vietnam, Sara and I carried bricks from where we parked, to the build site—balancing on narrow paths through the rice patties—shouldering heavy sacks—so god-awful hot we sauna-ed even in the shade. 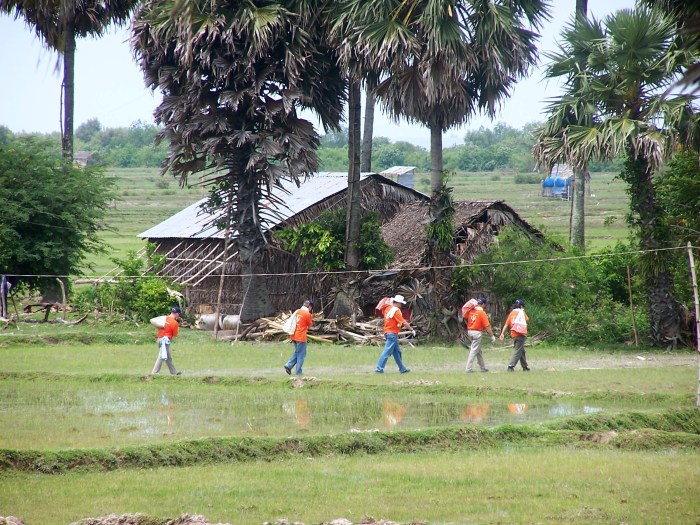 The local children carried blocks of ice along the same paths, so we foreigners could be welcomed with something cold to drink.

When we broke for lunch, we enjoyed the most amazing meal–steamed greens and spring rolls made from freshly caught shrimp.

After lunch I “encountered” my first squat toilet since Thailand–a form of sanitation the poorest local families lack.

During the hottest part of the afternoon, the cows tried to cool themselves in what minimal shade was available–which is to say, nearly none. 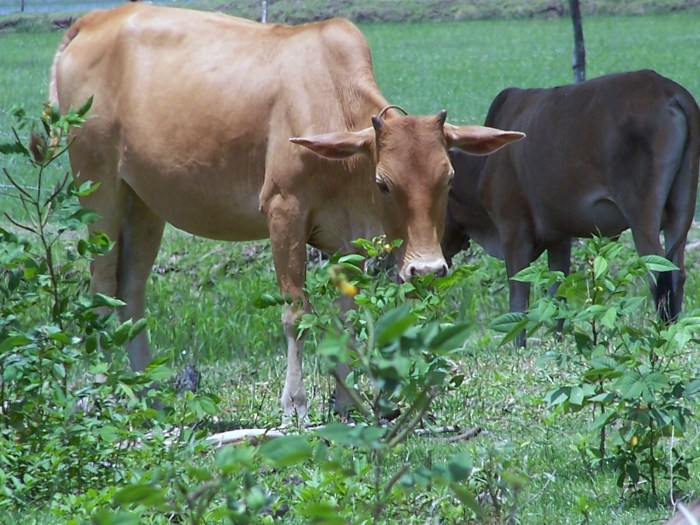 And, as we were leaving the build site even later that day, making our way back across the gleaming green of the rice patties, we stopped to talk to a family boiling sugar cane into syrup–a taste of sweetness amidst an otherwise bitter existence.

Before Sara and I left Rach Gia the following morning to fly back to Saigon, we walked the streets of this provincial capital, meeting old women wearing more cooling, conical hats and visiting fishing boats in the harbor–ones that had likely caught our shrimp the day before. 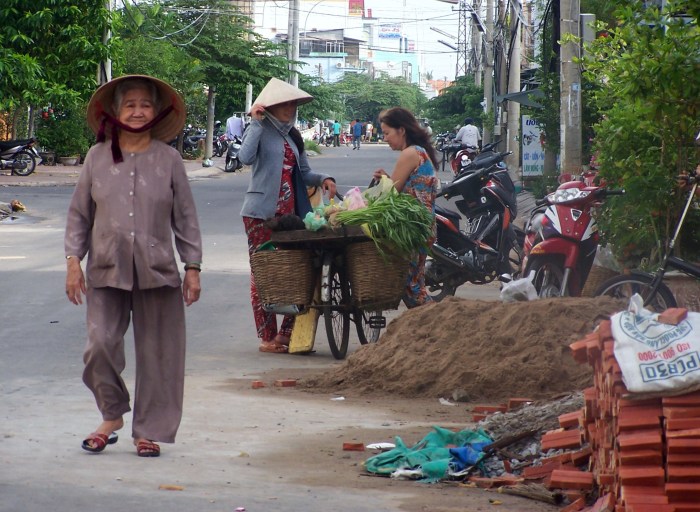 Sara and I may not make it back to the sweltering heat that is Vietnam any time soon, but we look forward this week to our refreshing visit with Minh, whom I hope to interview, so I can bring you updated information on the work Habitat for Humanity is doing now in his  country.  I hope to show you the faces of children whose lives are being improved by better shelter–who are given a brighter tomorrow–one based on the hope of homes we provide for them today.

And if I’m away from your blog this week, if I don’t read your newest posts, please forgive my absence.

I’ll be busy catching up on Vietnam–enjoying the face of a friend from a far away place–not only a land and a love  my blog will embrace–but the face of a nation no longer at war.

Even if you’ve never walked among the rice patties or looked a water buffalo in the eye, have you ever encountered crippling poverty?  How did it make you feel?  Did it change you in any way?

Note:  If you are new to my blog, you might like to know that I am writing a memoir and blogging about growing up in an organized crime family.  (This post is not part of that series.)  To read one of my mafia-related memoir posts,”Kids Make the Best Bookies,” click here.  If you are interested in reading any of my protected posts, please email me at kownroom@yahoo.com  or let me know in the comments below, and I will gladly share the password with you.

45 thoughts on “Rach Gia, Vietnam: The Face of Poverty among the Rice Patties”