And this coming weekend, the woman I’ve loved for six sensational years will celebrate another birthday.

For those of you who might not know, my partner is an international aid worker who directed Habitat for Humanity’s response to the 2004 tsunami in Asia, as well as their operation in Haiti following the earthquake in 2010.  She’s lived everywhere from Afghanistan to Thailand, India to Indonesia.

Yes, I may be biased, but I’m not alone in recognizing her gifts–her remarkable leadership, her pure heart, the hope she’s brought to many around the world.

But Sara is also creative.

And, as part of her most recent creative pursuit, Sara has taken a photo a day since the first of 2012.  At the beginning of this project, I shared her photos here on my blog, but then Sara discovered a venue of her own and began publishing her images on BlipFoto–at a site she’s calling “Que Sera Sara“–Today’s Whatever.

So, if you can tolerate my unabashed pride in Sara’s work, I’d like to post, in honor of her birthday, a few of my favorite photos Sara has taken in the past several weeks.

In the first photo below, Sara captures our weather-worn gutters overflowing during a spring storm.

As Sara has said, our entire neighborhood, reflected here in the background, knows our house as the one with the little white dog in the window.

The day our city was abuzz with Big Blue Mania and Lexingtonians celebrated the return of basketball champions UK Wild Cats, Sara and I walked downtown and watched this little boy playing in the fountain at Triangle Park, adjacent to Lexington Center, the home of Rupp Arena.

This past fall Sara re-imagined our unfinished cellar.  Now, despite its gravel floor, graffiti she created makes it a basement blooming, a place where Sara can conceive new “projects and possibilities.”

Sara is doing disaster response consultation with Habitat for Humanity Kentucky.  Here she’s imaged not only the destruction a tornado wrecked on West Liberty, Kentucky this spring, but also the community’s enduring hope, their determination to rebuild a town nearly obliterated by natural disaster.

Sara laughs that our “family” is comprised completely of “blondes.”  Here she captures a sweet, if very blonde moment, me with dogs Ralph (left) and Lucy (right). 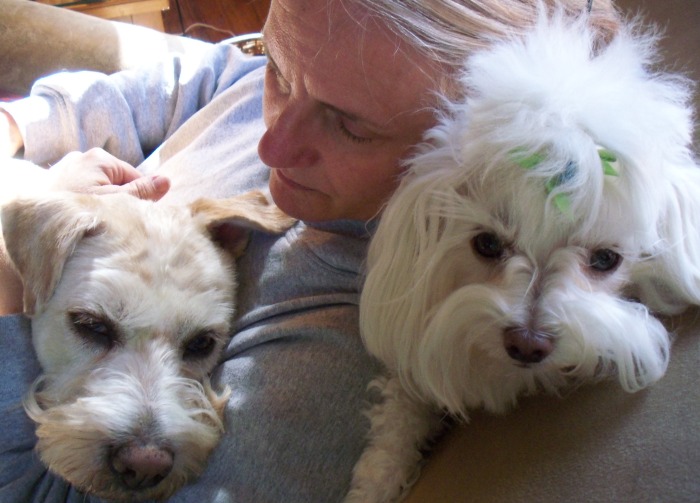 The poppies blooming in our front yard remind Sara of living in Afghanistan, where these “beautiful flowers cast such dark shadows.” 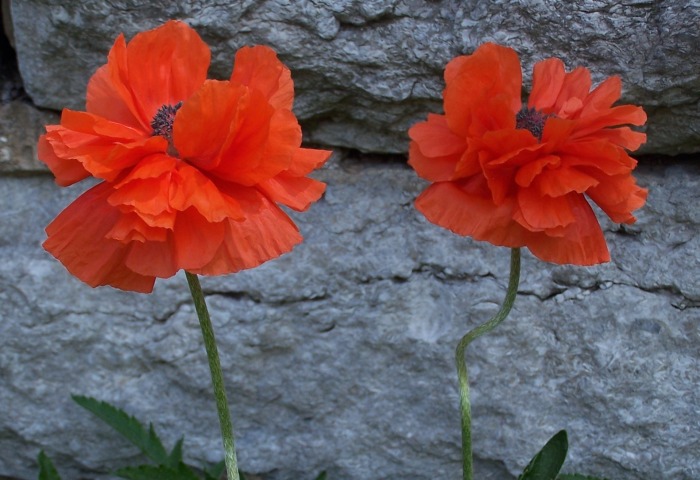 Here Sara’s great niece enjoys time with grandpa Bryce.  Taryn is the baby of the family—a source of “great delight.” 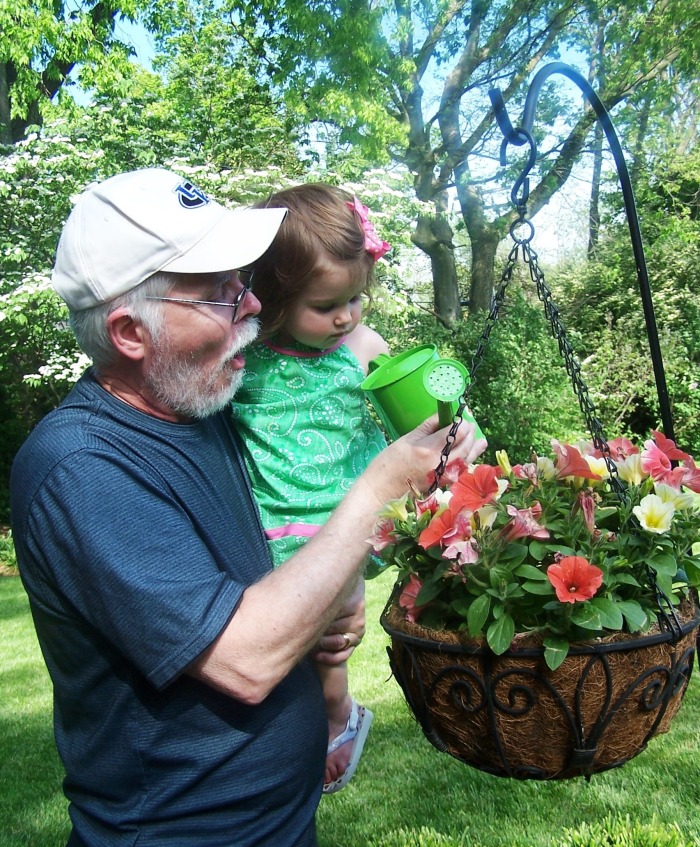 Sara says she loves living with a writer—someone who spends her days typing on a laptop or scribbling in notebooks—working, with Maltese Lucy “pressed” up next to me.  Here she caught me responding to comments only moments after discovering my post  had been Freshly Pressed. 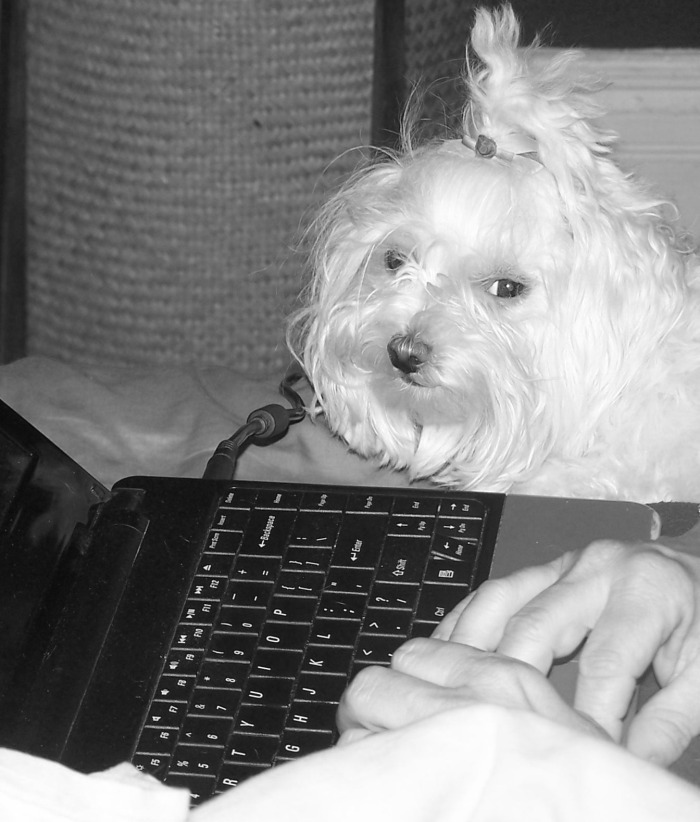 On another trip into the Appalachian foothills to consult on tornado recovery, Sara saw this old auto parked on the courthouse lawn.  Sara says she felt like she’d been transported back in time and reminded that “not all is destroyed or lost over time—that there are still places, people, and things that hold past and present together.”

Sara spent one afternoon last week digging in the dirt, physical labor that made her body ache but left her heart refreshed.  While cleaning up her tools at the end of the day, a robin paid her a visit, harvesting the worms that wiggled in the dirt where Sara had been “playing.”

In Lexington, Kentucky, which many deem the “Thoroughbred Capital of the World,” racing season, as Sara says, “dictates our community’s collective calendar.”  The Derby will be run on Sara’s birthday itself, but several days ago my partner reigned in this stylish steed several blocks from our house, in front of the downtown courthouse. 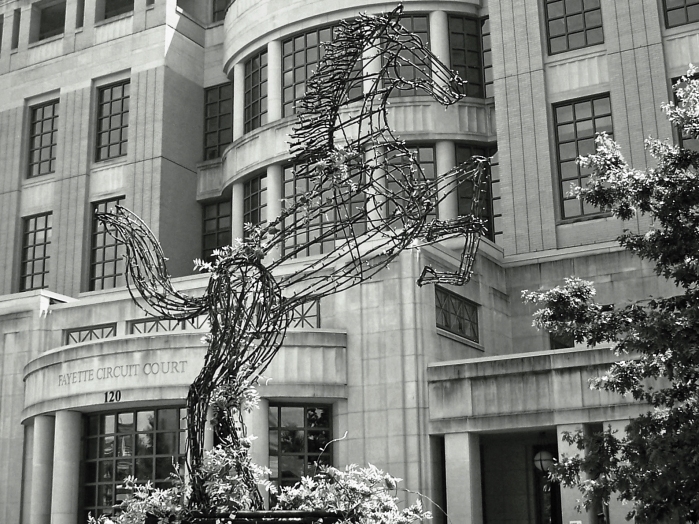 Last weekend Sara rode with her siblings to Ohio for a family, funeral visitation.  Though their lives have taken different paths, they’ve retained a common bond, one that grows stronger as they live longer.

Last spring, when we returned from Haiti and my partner worked to transform our back garden into a place of beauty, Sara’s stepmother gifted us three varieties of iris, instructing us quite clearly that one should never say “thank you” for a flower, but rather agree to give it a good home.  In the past three days Sara has posted a triptych of iris photos which she’s called “No Thank You”—a series meant to honor that gift—an oblique expression of gratitude for their blooming, one that bi-passes the forbidden “Thank you.” 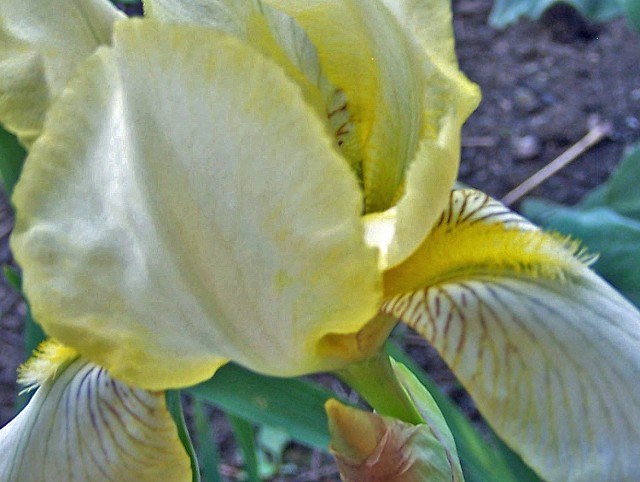 I hope you will visit Sara’s BlipFoto site.  I know she’s gotten to know a number of my blogging buddies through blipping, but she’d love to meet more of you.

But if you are new to my blog and would like to know more about Sara, here at the end I’m attaching some of the photos I used in last year’s birthday post for Sara.

I hope you will scroll through them, as they will show you my partner’s path in action–

A path that involves rocking:

weight of the world? 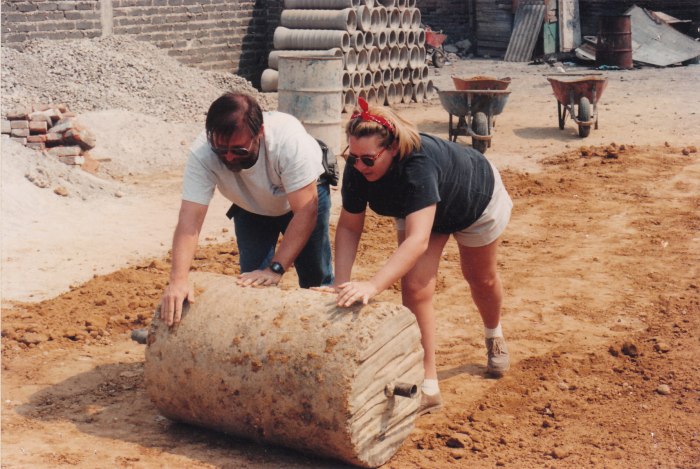 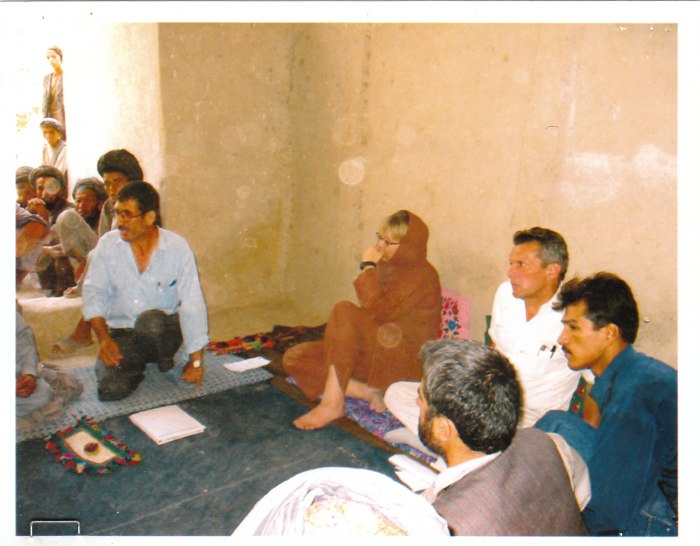 with tribal leaders in Afghanistan 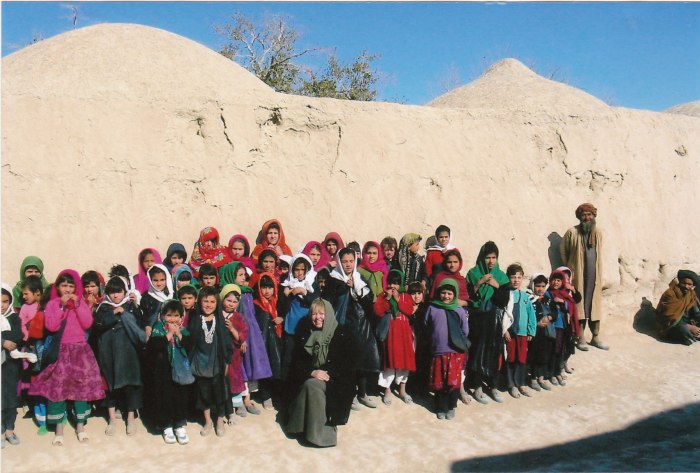 being Sara’s partner–one heck of a ride! 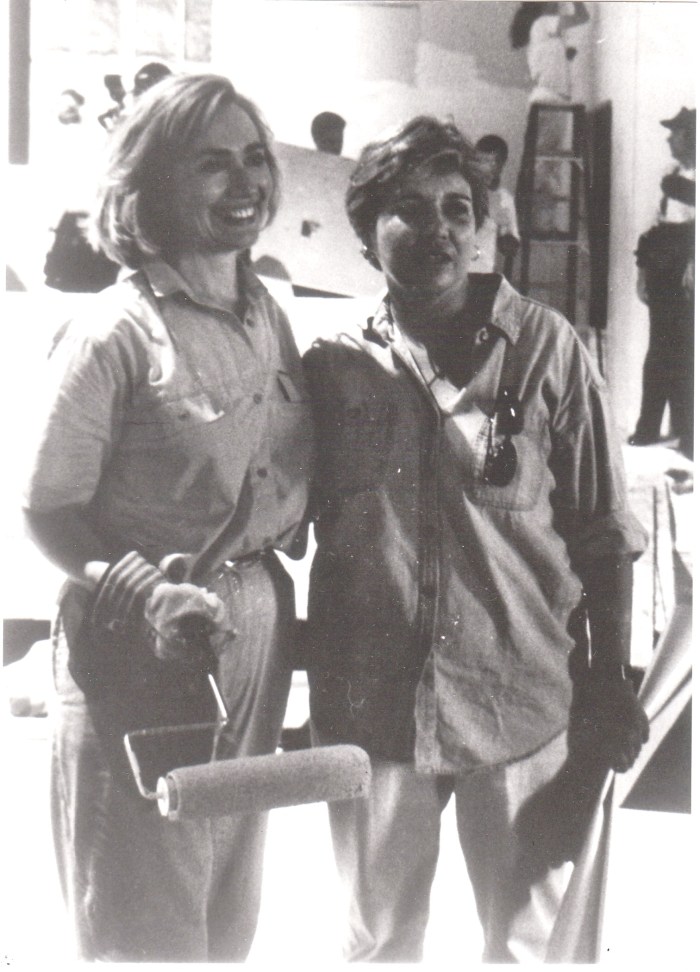 Always it involves pulling your weight:

not another tug of war!

Even bringing out the heavy artillery: 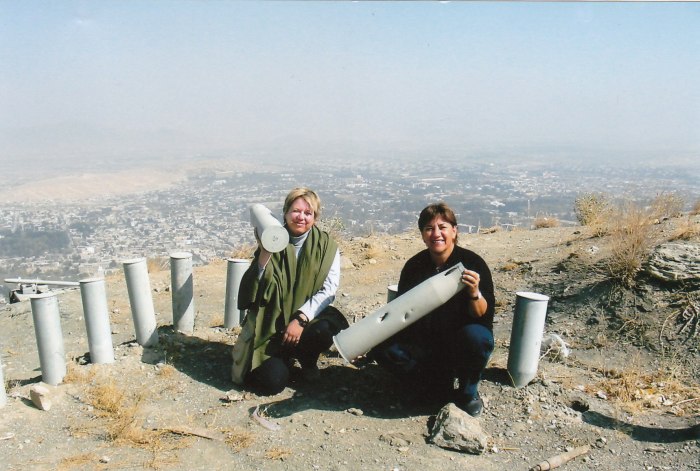 But often we do the heavy lifting together: 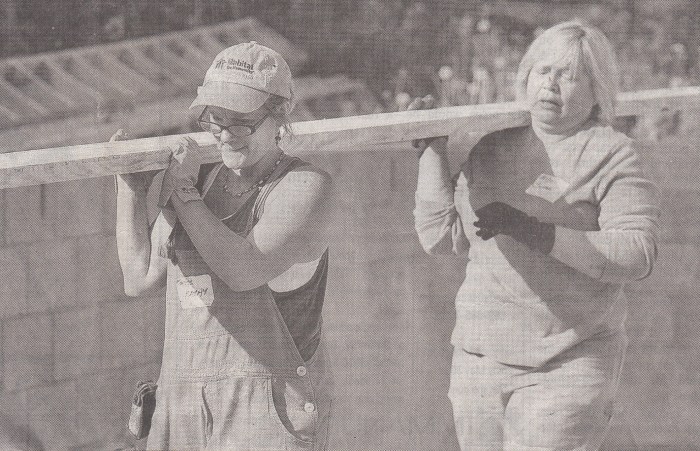 Yes, sometimes Sara wants to pull her hair out:

But basically we live our lives like everyone else–loving one another.  We just do it from far away places: 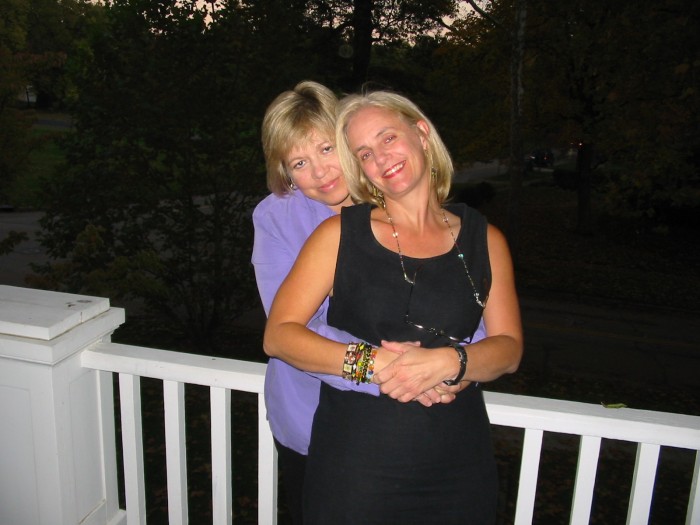 And the dog that brought us together: 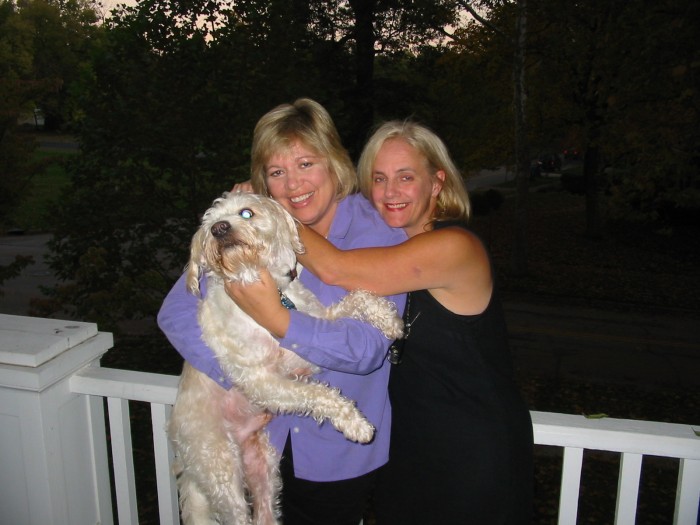 Not to mention our other dog: 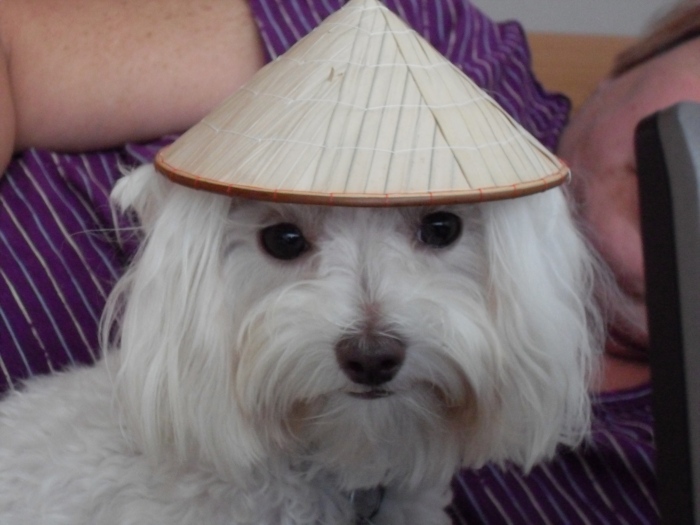 Who insists on silly hats–

There’s nothing as amazing as the woman I love:

I love you, sweet Sara!

(To read an article about Sara that was published this past year in the “Lexington Herald Leader”, click here.)