I’ve re-written the first chapter of my memoir.  Have a look, and, if you have time, please consider some of the I pose at the end.

Note:  I’ve added the first sentence of chapter 2 at the end of this post, so you can see how the first chapter will transition into the 2nd.  I’ve also added below a new title option for the memoir.  What do you think about it?

Until I found myself screaming at the FBI agent who tried to implicate my mother in Daddy’s crime, it had seemed a fairly ordinary day.

Munch, “The Scream” (image via wikipedia.org)

I’d ridden our school bus to and from the private, Christian (but madrassa-esque) academy my parents forced me to attend.  There teachers drilled us in the books of the Bible and in what they called the “Romans Road;” they taught the tenets of the John Birch Society and the virtues of a free market economy ruled by the eternal and unerring principles of supply and demand.  There, boys’ hair didn’t touch the tops of their ears or come close to their collars in the back, and girls were allowed to wear only skirts and dresses and “modest” ones at that, ones whose hems touched the floor when we were kneeling.  I’m referring here to the periodic, sometimes weekly, skirt-length checks that were carried out in the chapel just above the basement classroom we shared with tenth graders.

That evening my mother had cooked meatloaf topped with tomato sauce for dinner, and my paternal grandmother “Kimmy” provided a two-tiered cake from the bakery up on the hill, the same place she’d purchased them ever since my first birthday, though this time it was my sister Susan’s turn to celebrate.   My father had been busy on the phone taking calls from clients, two televisions and a radio broadcasting basketball scores in the background.

After dinner, I’d done the dishes, finished algebra equations, and studied for a chemistry quiz, when Daddy decided an outing for ice cream was in order—as if arctic on the outside weren’t enough, now we’d add the insult of brain freeze to the injury of temperatures hovering in the single digits.

My mother had reminded Daddy to hide his papers before we left the house—the sheets on which he recorded in careful columns the bets his clients called in—who had placed how much on which games.  We had a door whose top had been hollowed out and lined with tin—the same size needed to hold the folded papers.  Daddy should have hidden the evidence there, as he usually did.

Daddy with the kind of papers he should have hidden–

“Oh, Judy!” Daddy said, dismissing my mother’s suggestion, and adding, as he clapped his hands to hurry us along, “Let’s get this show on the road.”   With that he snatched his keys from the landing table, set his papers on the carpeted steps just inside the door, and we were on our way, Daddy in the lead, my mother bringing up the rear.

Descending the steep steps from our house above to the street below, we were headed to Sweet Williams for two scoops on a sugar cone, when the raid occurred.  It was a frigid February evening.  I wore a navy pea coat with the collar turned up—bundled against the chill.

It was dark outside, except for a single street light that brightened the cement steps, when a brown, unmarked sedan pulled up and federal agents jumped out, one slipping on the icy street and nearly falling, another grabbing Daddy and shoving him against the wall that separated our stairs from the road below.

As it became clear a raid was underway, my mother, two sisters, brother and I raced back toward the house.  The first inside the front door, my mom covered the incriminating papers with her purse, as we rushed in behind her, over-coated FBI agents on our heels.

I don’t recall exactly what the agent said who saw my mother’s futile effort to literally conceal evidence beneath a burgundy Gucci bag.  I suppose the charge might have been cover-up by pocketbook or some other crime of the coutured-handbag kind. 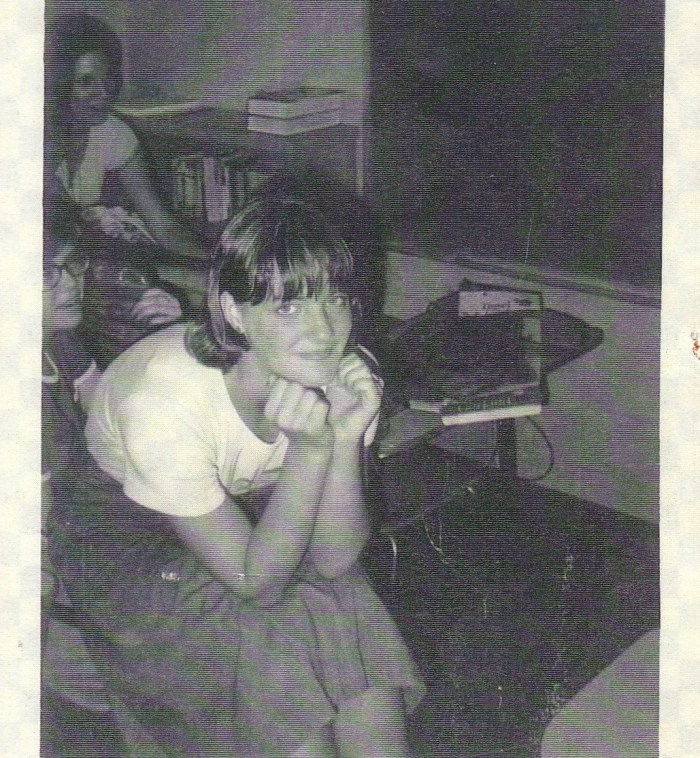 The actual adolescent screamer at her (my) madrassa-esque, Christian academy–

“Don’t you dare try to take my mother,” I heard someone screaming—recognizing, in an insanely surreal and close-to-comic five-second-delay, that the screamer had been me.  But after that my mind goes blank, and I remember nothing else about that evening.  I don’t recall how events unfolded after that, what resolution there might or might not have been.

But beyond my own later memory lapse and my mother’s obvious involvement in the event, most striking about that night is my overwhelming need to defend my mom, my forbidding, as if it would have made any difference, FBI agents from implicating her, my naïve, adolescent screaming, not in defense of my father, who agents were obviously after, but the urge to protect my overtly religious mother–still stunningly attractive in leather pants and mink coat–a woman who, by all accounts, should have been beyond reproach.

Clearly, I’d learned, not only from my white-haired and handsome, mafia father, but also from my Bible-believing mother, that good and evil are complicated matters.  Admittedly, this is not a lesson either parent taught overtly, but one I came to over time—trying to digest and accept the ambiguity of loving someone who did wrong in legal terms but demonstrated considerable kindness otherwise, and someone else who claimed Christian values but didn’t consistently live them, didn’t demonstrate the love of Jesus as often as I’d needed.  My father broke the law.  At least, several grand juries suspected he had.  And obviously my mother, although the seeming “good guy” in her woman-of-God claims of Christianity, also made mistakes.

But my father complicates the picture, for although a criminal, he was also consistently kind, generous, witty—the sort of guy one wants for a friend—great fun at parties—charming.  I knew nobody who disliked Daddy, no one who spoke ill of him. Likewise, I never knew him to bad-mouth anyone.  I never even heard him curse.

I think, it’s easy to forget that those who commit crimes, do so in a context, sometimes in the context of otherwise good lives. Those who commit crimes do so, also, in the context of family. They have wives and children, mothers, fathers, sisters, brothers. Sometimes otherwise kind people commit crimes, cross the line. Good people do wrong, make mistakes.  Clearly, my father’s “crime” became a way of life—so much so that as a child I knew no other context—no other reality.

My father proposed to my mother on their first date . . . .

Would you mind sharing in the comments below both what you like and don’t like about this chapter?  Also, if you have time to respond further, I’d appreciate feedback on the writing itself.  Is there anything that doesn’t work for you?  Finally, what do you think of the new title I’m trying out and the transition between chapters?

Note:  I don’t recall the exact details as they unfolded that evening prior to the raid.  I only remember for sure that it was my sister Susan’s birthday.  In order to develop the narrative in the first part of this chapter, I’ve tried to reconstruct events as best I can based on details  recorded in journals from around that time.  I don’t have any kind of diary entry written on this exact day.  A few of the details from the raid itself I’ve gotten from my mother, brother, and two sisters.