My access to the past feels broken these days—not a good development when one is writing a memoir—so it’s especially important that my “Rumble with the Tumble” in paper and paint continue.  (To read chapter 1 of  my memoir, click here .)

You see, it’s the ability to look back in a meaningful way—to exchange over-the-shoulder glances for a sustained look at what was—that I’m trying to work out visually in the staircase I’m transforming.

Yes, I fell down those stairs several weeks ago.  Yes, that tumble required a trip to the emergency room.  But I wasn’t permanently broken.  By repeating the circle image, I’m reminding myself that I can turn things around—can come full circle—whether that action involves recovering from a fall or twisting back into a broken past and coming round again.  In both situations, the process is a spiral of dis-membering and then re-membering ones self—a helix of life lived all over again.  In both situations, trauma, like DNA, imprints past on present.

However, it’s my ability to move on into the future despite past trauma—the ability to forge ahead while retaining the ability to function— that I image in the green and blue stripes that begin at the bottom of the staircase and continue to the top.  My sister and I sometimes tease, when discussing the craziness of our childhood, that we are now “walking-around human being,” semi-normal-looking people, able to function and stand on our own—able to sustain some semblance of verticality—despite a childhood that was marked by organized crime, FBI raids, and even religious fanaticism.

When you look at the photos below of the most recent steps I’ve completed, note particularly the text I take from Margaret Atwood’s poem “The Circle Game” and inscribe on stair number 7 and the photocopy on step 5 from “Dr. Goat,” a book my mother read to me as a toddler.

Atwood, my favorite poet and novelist as an adult, writes about the circle of dysfunction being broken, while the story read to me as a child emphasizes cycles of reciprocity and a karma of kindness, since Dr. Goat helps those in his community who are sick, and they, in turn take care of him when he becomes ill, allowing him to recover and begin the process all over again.

But before I move onto photos of the new steps I’ve completed, I’ll
remind you what the first 4 look like. 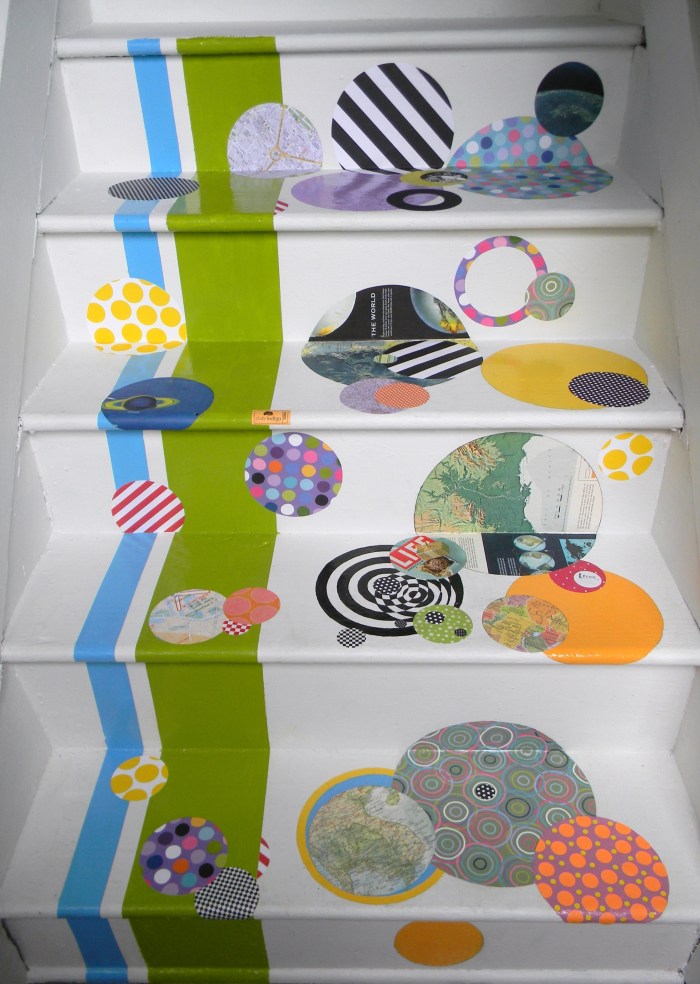 (Note:  I photographed the steps below before all images were decoupaged into place.)

In the photo above and the one below, notice the map of Bangkok I incorporate.  Sara kept an apartment there while working on recovery efforts for the 2004 tsunami in Southeast Asia.  Below you’ll also notice a small doodle I did about surviving in tact after a difficult past. 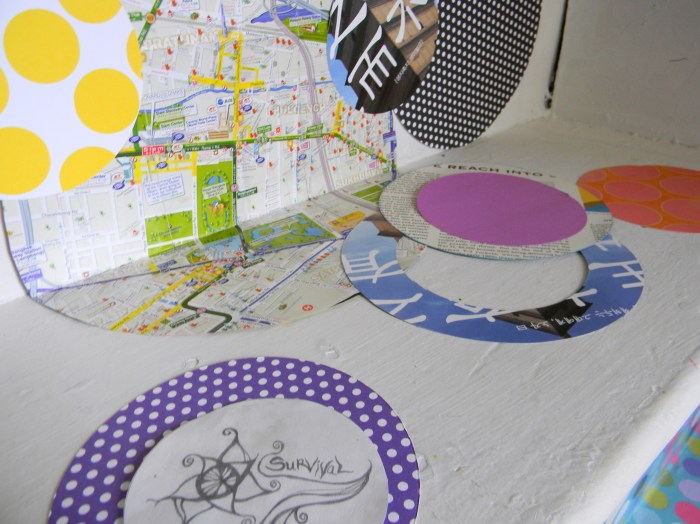 I feature Dr. Goat in the image below.

I cut the text below, the one that reads “lovers,” from an old Tarot card, while the tree in the next two photos is from  a 1970s  National Geographic.

I found the half circle of pink coral below in another National Geographic from the same era.

You’ll notice in the photo above that I began cutting the centers from my circles–an effort to suggest my only partial ability to remember–my own gapped experience of the past, if you will.

Sara loves to do Sudoku puzzles.  In the picture below is a circle I cut from a collection she picked up somewhere in Asia. 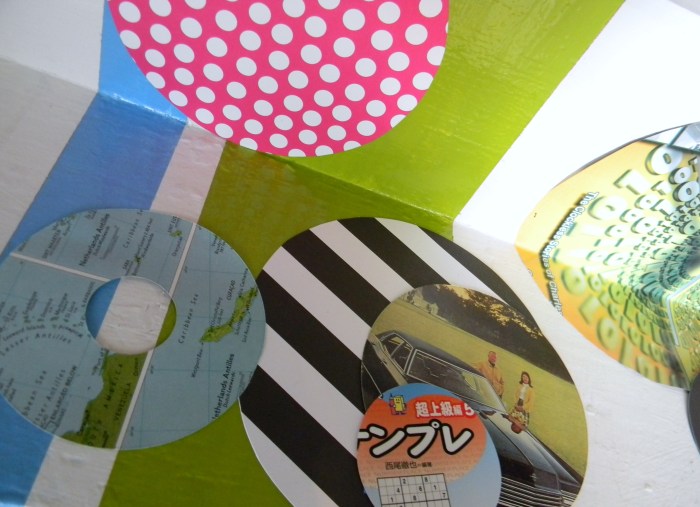 The clock cut from an old edition of the Writer’s Chronicle images my effort to reconnect with the past, while Atwood’s poem suggests a by-gone era that needs redeeming. 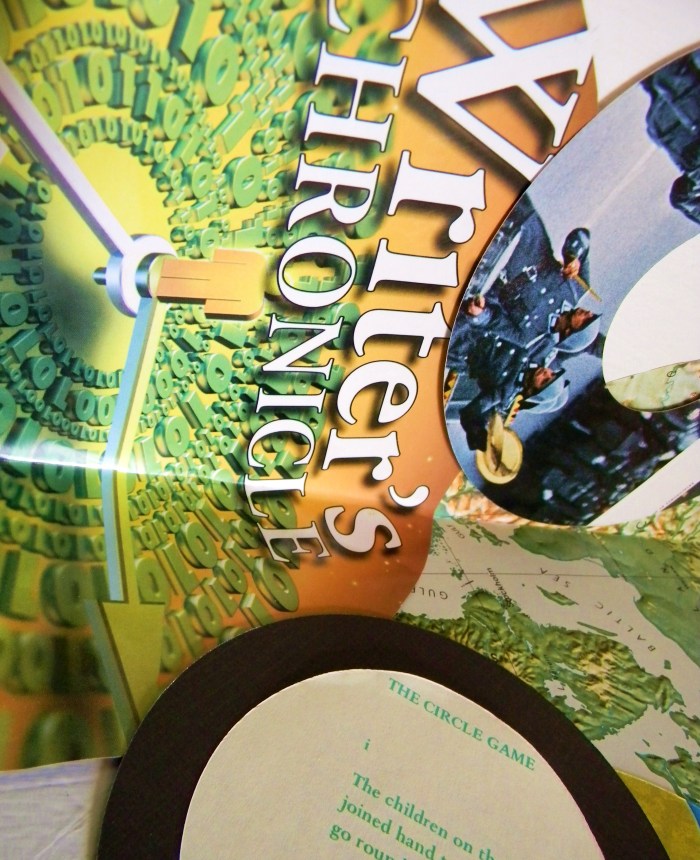 All steps completed so far:

Though Atwood writes about our need to break with the dysfunction of the past, my memoir, like this staircase, is also about taking something that might seem negative to a child and rewriting it as something that can heal, something that can promote community and reciprocity.  This process of revision takes my particular past and transforms it into a story we can all relate to, something we can all participate in—a grace my staircase images in paper and paint—the same love, the same light—the same redemptive story.

How have you managed to work through pain from the past?  What’s the greatest grace that you’ve been given?

73 thoughts on “Stepping up and Looking back (More Redemption in Paper and Paint!)”