You think I’m kidding. Better yet, you assume I’m crazy.

However, I’m neither, actually.

Well, I may be a mad brick shy of a lucid load—but, during the 1990s I was admitted to psychiatric facilities no fewer than twenty-five times, so I consider my less-than-sane self somewhat of an expert on having learned these applicable-nowhere-else-other-than-prison, life lessons.

If you plan on checking into a psychiatric facility near you any time soon or even if you don’t, by all means remember the following:

As part of the admission process to any mental hospital in America, a nurse or hospital orderly inventories your belongings and locks up all items known by insiders as “sharps,” which generally include anything you could use to hurt yourself or others—razors, scissors, pencils, pens, and without fail, the deadly dental floss. I don’t know of anyone who has ever attempted hanging themselves with dental hygiene products of any kind, but clearly some creative suicide somewhere has done just that, because without fail, floss is taken away. How I managed to spend a decade with so little access to the stuff and emerge ten years later with a full set of teeth, is a mystery to me.

Seriously, the real lesson here is that we can make do with a whole lot less than we might think or at the very least, that magic markers are deadly weapons. Let’s just hope the TSA never catches on.

Also during the admission process, someone is bound to give patients a schedule of unit activities, indicating that the day ends at 10pm on week nights and 11pm on weekends. Without fail, hospitals from Kentucky to Texas operate according to this bed-time regimen. Medical staff is surely trying to teach that schedules are a good thing or that mental health depends on getting plenty of rest. However, they adhere to this schedule as rigidly as Republicans in the US Congress believe in the evil of ObamaCare or the sanctity of a balanced budget, a rigidity that may make the obsessive-compulsive dedication to hand-washing and stove-checking look like a fact-finding mission.

Sleeping through them is one thing, but skipping them altogether is paramount to treason. In mental hospitals attending group therapy sessions is the patient’s civil responsibility—way, way more important than voting in the outside world. Not casting ones ballot is one thing, but skipping group means something way worse than Mitt Romney as president, unless, perhaps, Sara Palin makes it to the White House one of these days. The consequences for skipping group are far harsher and include, first and foremost, having ones level lowered.

Psychiatric hospitals function according to a definite hierarchy—doctors on top, nurses not far behind. Although patients are consistently on the bottom, there’s always a hierarchy even among the inmate population itself, one that’s determined by a system of levels. Level one usually means you are on “fifteen minute checks”—that an orderly with a clipboard must note every quarter-hour where you are and what you are doing, whether, for example, you are asleep in bed or in the day room playing cards. Level two usually means a promotion to thirty minute checks, while level three means no one gives a damn where you are or what you are doing except at the top of every hour—unless, of course, you are attempting to skip group or floss your teeth, in which case all bets are off. It used to be that you also couldn’t be discharged until you’d achieved a level three, but in these days of managed care, having one’s insurance benefits run out usually means an immediate promotion through the ranks. Suicidal or not, you can have all the magic markers your discharged heart desires.

Psychiatric medications are notorious for making patients gain weight, and lots of it. Antipsychotics tend to stimulate the appetite, slow the metabolism, and “increase body mass”—as my own doctor likes to remind me. However, one of the tenants of inpatient psychiatric care is to feed patients, not only three meals a day, but plenty of fatty snacks, as well. They must teach this in medical and nursing schools, as the sanctity of Fruit Loops, even the holiness of Wonder bread and canned corn, seem to define a doctrine of carbs that would drive Dr. Atkins himself beyond the bacon-eating brink. The likelihood of being discharged a little less mad and whole lot heavier seems inevitable. So as soon as you get your level-three, fat-ass self discharged, join Jenny Craig before suicide again becomes an option. Remember, over-sized, crazy ladies rarely win.

One of the things I learned from my ten-year, revolving-door, psychiatric admission is that life is all about second chances. Life now is every bit as good as the 90s were bad. During the past decade I’ve had an amazing career teaching college writing; I’ve met the love of my life and traveled the world—literally.

And since I’m such a firm believer in the do-over, let me confess—this piece almost entirely a repost of one I did last summer.

Truth be told, I’m up to my eyebrows in an art project Habitat for Humanity has asked me to undertake and blog about for their website— so forgive my taking the easy way out today.

But it’s true. I did learn lots about the do-over during my 10-year, grand tour of America’s finest psychiatric facilities.

The bottom line is this—

Follow my example. Learn from my mistakes. Apply these lessons in your own life, so that you too can learn to live sanely in a world of pens, pencils, and dental floss.

Ten-years sans-psyche ward, I am still fat, forgetful and more likely than not to lose things, my mind being foremost among them. 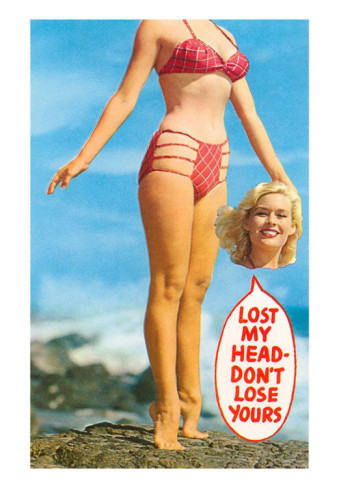 Do you think that’s what my mother meant when she said I’d lose my head if it weren’t attached?

What second chances have you been given?  At what unexpected places have you learned the greatest lessons?