Forgive the pathetic pun.  I’ll ask that up front.

But today I’m writing about the most commonly seen bird in Cuenca, Ecuador, the mountain town spouse Sara and I now call home.  These friendly fowl are, for that  matter, the most ubiquitous bird in many cities, the world over.  Wherever you live, you may know them all too well.

Yes, you guessed it.  Today’s post honors the poor and, too often, under-appreciated pigeon.

Not only do these birds, also known as doves, mate for life–about 5 years–they manage to live almost everywhere.  They flock in the manicured parks of el Centro, the colonial heart of our city.  They perch on roof tops, preen one another on drain pipes, and patrol the sidewalks of Totoracocha, the suburb where Sara and I live.

I know they aren’t the most exotic of birds.  Heck, they’re not exotic in the least.  They poop a lot.  Some say they’re dirty, carry disease, remain a general nuisance to the proper maintenance of urban order.

I happen to disagree.

But mostly because I have a perfect view into pigeon paradise just outside my studio window.  And since we’ve lived in this house for the past three months, I’ve watched the mama and papa pigeons come and go from their nursery under our neighbor’s eaves.  I’ve watched them refurbish and freshen nests, feed their young, and raise two sets of babies to near adulthood.  I’ve held and fed the little ones who’ve flown the coop too soon; I’ve even learned to climb high enough and then balance babies on the end of a broom to return them to their nest.  Not only that, but I’ve gotten to know our neighbor, as well, a little boy who loves them even more than I do, and I’ve taken more pigeon pictures than I can count.

So, if you’re a pigeon-prejudiced person, please forgive my silly pigeon post.  I hope some of you will enjoy the fowl photos Sara and I have taken over the past few months. 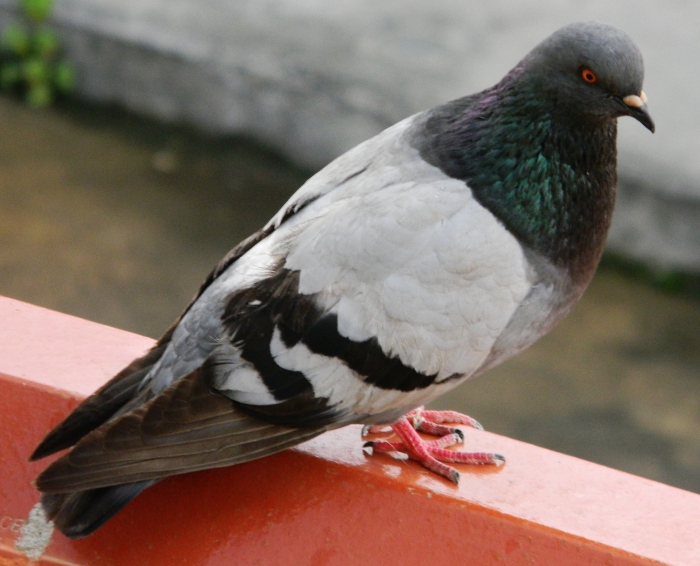 At three-weeks-old pigeons look almost identical to their fully grown counterparts, but they’re still learning how to fly.  If they get down from the nest too soon, they sometimes can’t fly high enough to return.  This was the case with the chick below.

Our dogs love the pigeons almost as much as we do.

Ralph allows me to watch with him. Lucy supervises from a perch of her very own.

Until I figured out how to return the chicks to their nest, I fed them a warm cereal, of sorts–a porridge of dog food and water.   This seemed to confuse our canine companions, who tried to claim it was their meal time. 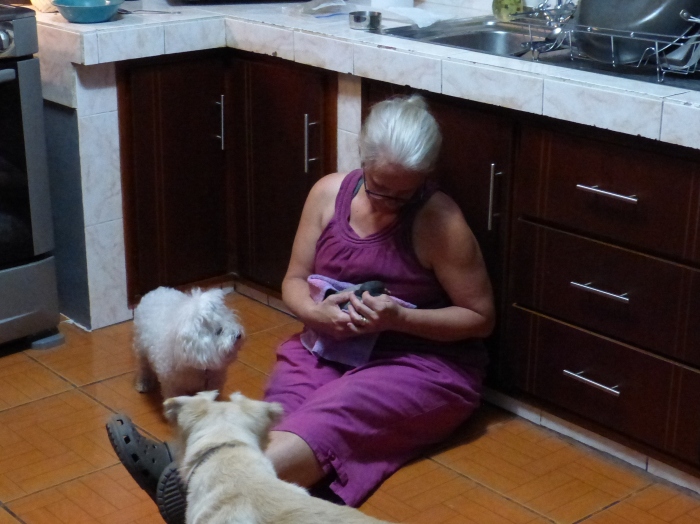 Preparing to feed the rescued chick from a syringe.  Ralph and Lucy “help.”

Since our second set of chicks has grown to about three weeks, as well, our nine-year-old neighbor Ariel has knocked at our gate, indicating that one of these friendly-feathered toddlers had wandered into our living room.  My Spanish not being what it could be, I assured him I had not brought the baby inside.  But Ariel was insistent.  Finally, I understood.  He didn’t think I’d taken it in on purpose.  He was merely indicating that it WAS inside.  When we looked, there it pecked and waddled, exploring the corner behind our newly-upholstered green chair!  Thank God for good neighbors!

Neighbor Ariel with the chick found in our living room–

The infant in the final photo below is tiny.  I don’t know where Ariel found it.  But he brought it to me–the Chick Whisperer, I suppose. 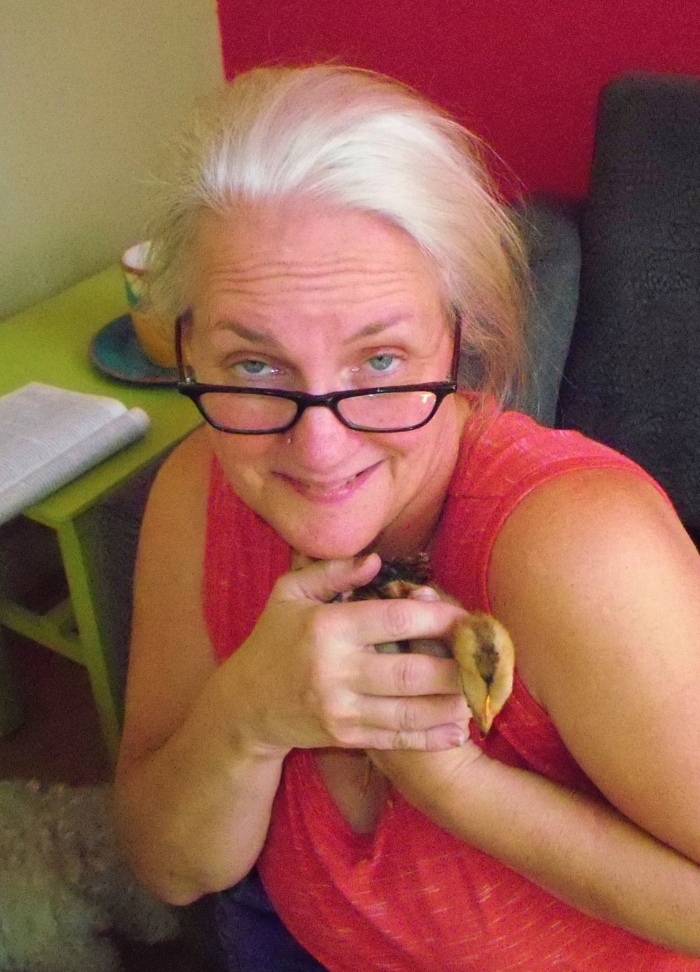 Call me the Chick Whisperer!

So it seems, we’ve moved all the way to Andes, and I’m writing about the most common, most disliked bird on the planet.  Leave it to me take up for a global underdog.

Oops, wrong species, but you know what I mean.  Right?

Have you ever rescued wildlife of any kind?  Would you?  Are you an animal lover, a “whisperer” of anything, perhaps

66 thoughts on “Once upon a Pigeon: A Bird’s Eye View of Ecuador”