To be honest, my message is a simple one.  I suppose, that’s often the case.

You see, Ecuador is teaching me about abundance—

A lot about it—

For example, I had heard how affordable the country is—that the economy is strong—that my US dollar would go a long, long way.  However, my North American mind could never have imagined buying twelve tomatoes for a dollar or twenty long-stemmed roses for four.  Who in the US or most parts of the developed world could anticipate spending eleven dollars for a month’s worth of electricity or having a $5 gas bill during the “winter” months?

But, as it turns out, the cost of living hasn’t been Ecuador’s greatest value to us as expats.  Rather, it’s the people and place itself we’ve come to care about– even more.

You see, when we moved here, I imagined we’d meet new folks and see lovely mountain landscapes.  I understood that both Ecuadorians and the foreigners living here would be friendly, that seeing the Andes is on a number of “bucket lists.”  Still, I hadn’t anticipated making quite so many new friends or seeing places of such staggering natural beauty.

And so far, Ecuador has offered an abundance of both.  We’ve been blessed.

I don’t know what I expected.  It’s not that I hadn’t hoped for either of these.  It’s something else entirely—the sheer surplus of each, I suppose.

And this past weekend offered a bounty of both all over again.

Saturday we had dinner with friends Juan and David and Susan and Fred at a place called Joe’s Secret Garden, and Sunday those same folks came to our house for breakfast, followed by a day trip to San Fernando, a very small town about an hour from Cuenca, by bus.

(If your travel in Ecuador takes you to Cuenca anytime in the near future,  eat at Joe’s Secret Garden.  You won’t be disappointed.  Service is only on Saturdays, and reservations are required)

Though we are still not completely unpacked since the arrival of our shipping container from the US more than two weeks ago . . . 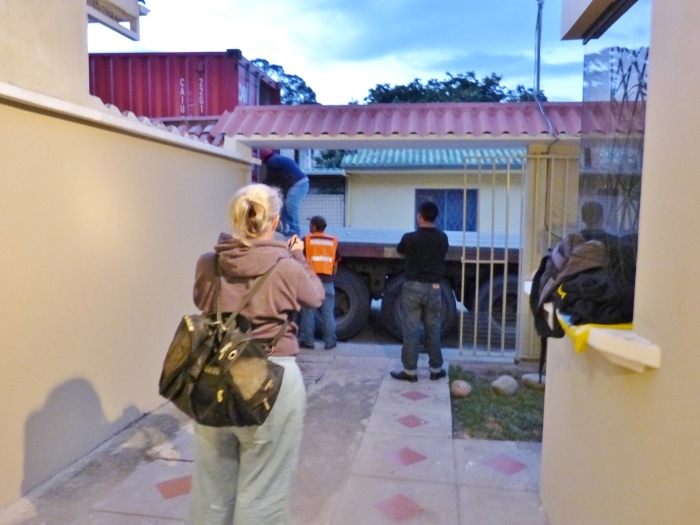 That’s my dog Lucy in the backpack carrier. (Sara’s image) 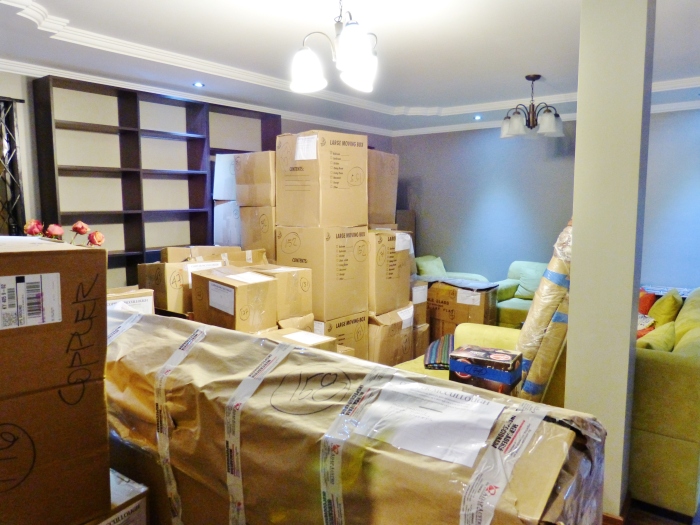 . . . still, the house is in good enough shape to entertain a few folks, which is something, if you know us, we love to do.

Four of my paintings and drawings are finally hung on the wall above the green chair. (Kathy’s image)

Our art from Haiti has also been hung. (Kathy’s image)

Sara prepared a lovely meal.   I baked great buttermilk biscuits.  But the day trip with friends turned out better than either of these.

We missed the bus from Terminal Terrestre to San Fernando, so we hopped one instead to Girón, since it’s only about 9 miles from the smaller town we wanted to visit.  (If you plan any Ecuador travel, be sure to see both Girón and San Fernando.  Bus fare from Cuenca to Girón is only one dollar.)

Sara and Kathy aboard the bus to Girón –(Susan’s image)

Once we arrived in Girón and proceeded to catch the bus on to San Fernando, we discovered it was crowded, with standing room only, and only enough of that for about two or three of us.  Since I had an accident the day before, I wasn’t anxious to squeeze in and stand for the entire trip on twisting mountain roads.

Kathy had a close encounter with a chair, a wall, and an electric drill.

So instead, the six of us hired a pickup truck taxi to drive us up the mountain to San Fernando and a nearby lake, known to the locals as  “Laguna de Busa.”  The town itself is at an elevation of more than 9,200 feet (2800 meters), close to that of Quito.

During our drive up, David rode in the back.

The rest of us sandwiched ourselves into the cab. 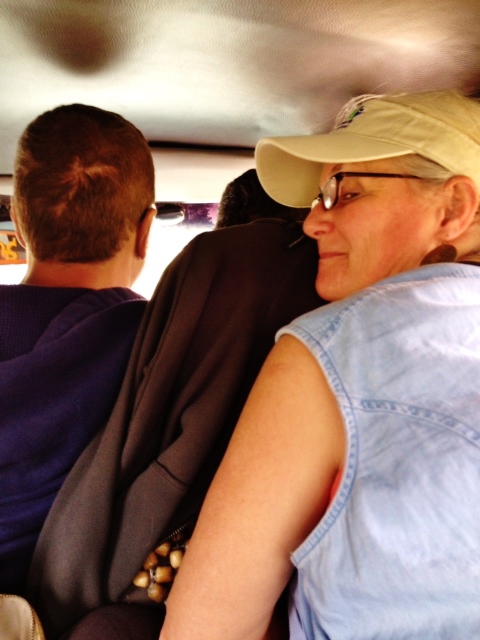 There was some serious pretzeling of arms and legs involved, but we finally all fit.  (Susan’s image)

The ride to San Fernando was spectacular. 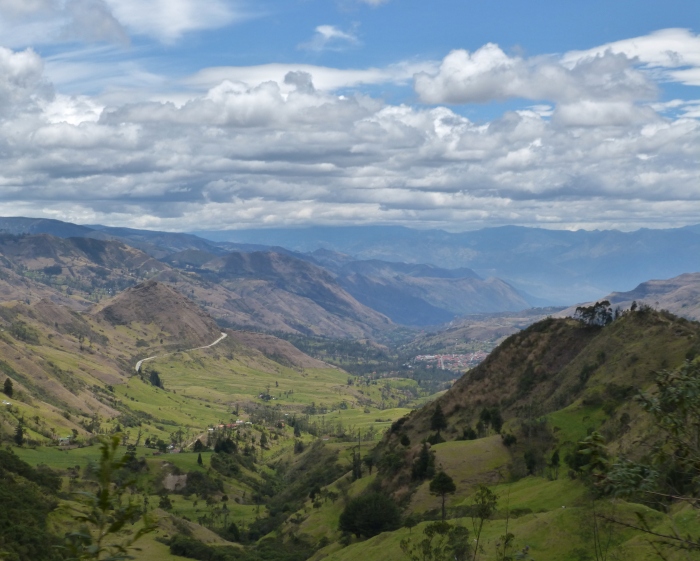 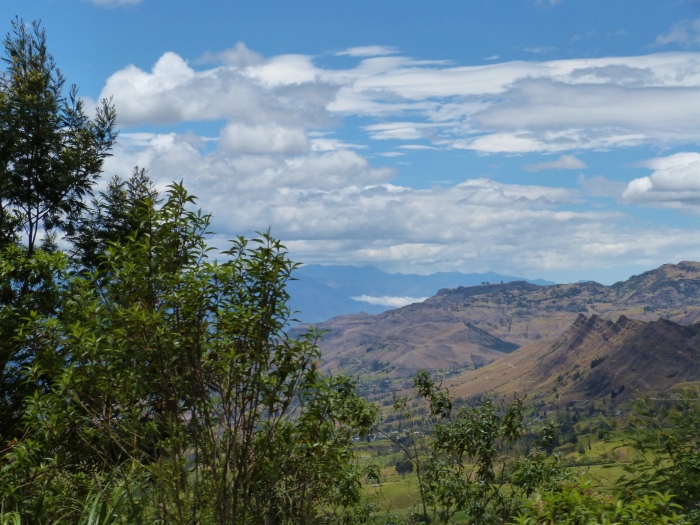 The lake nearby San Fernando itself didn’t disappoint either.  We took tons of photos. 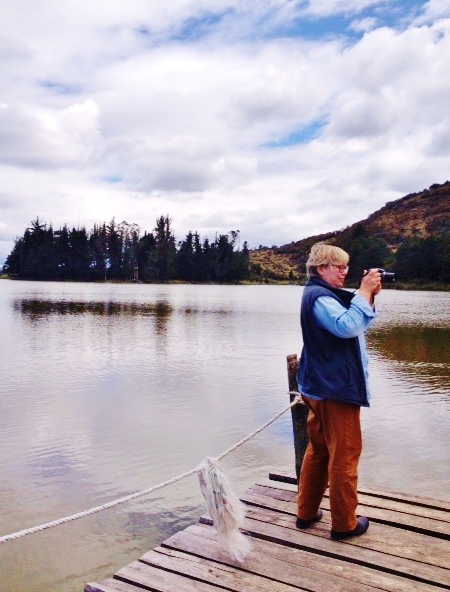 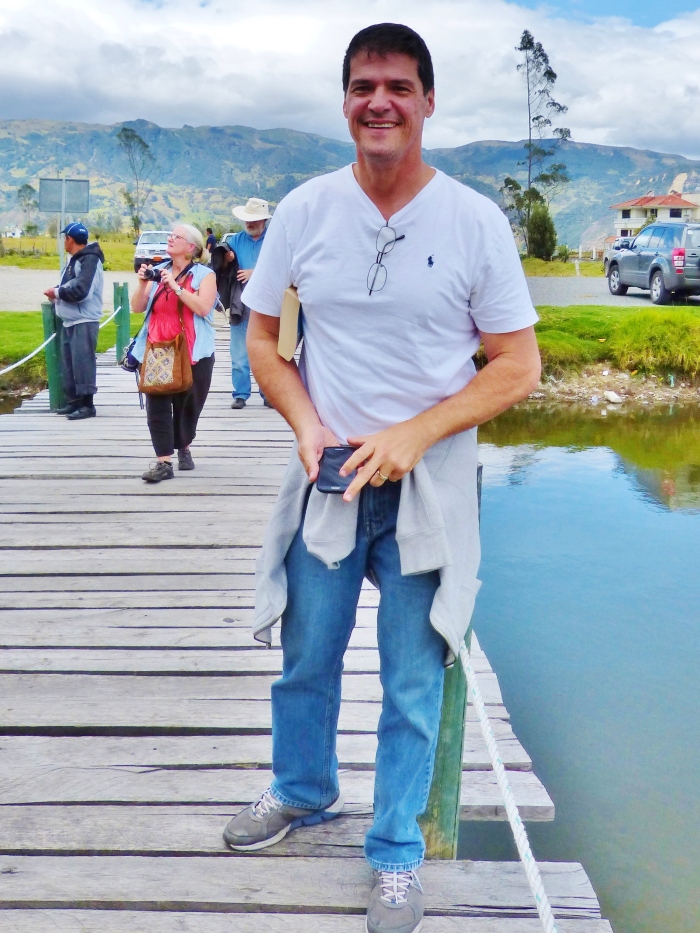 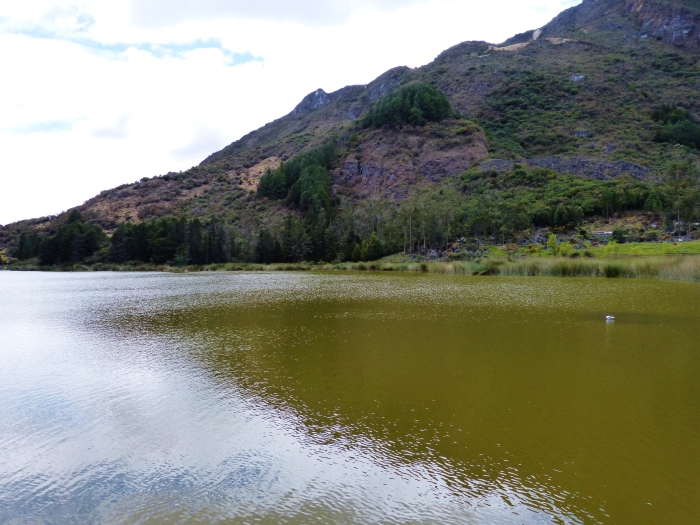 I love the light and shadow in this shot. (Sara’s image)

This mountain looms over the lake. (Sara’s image) 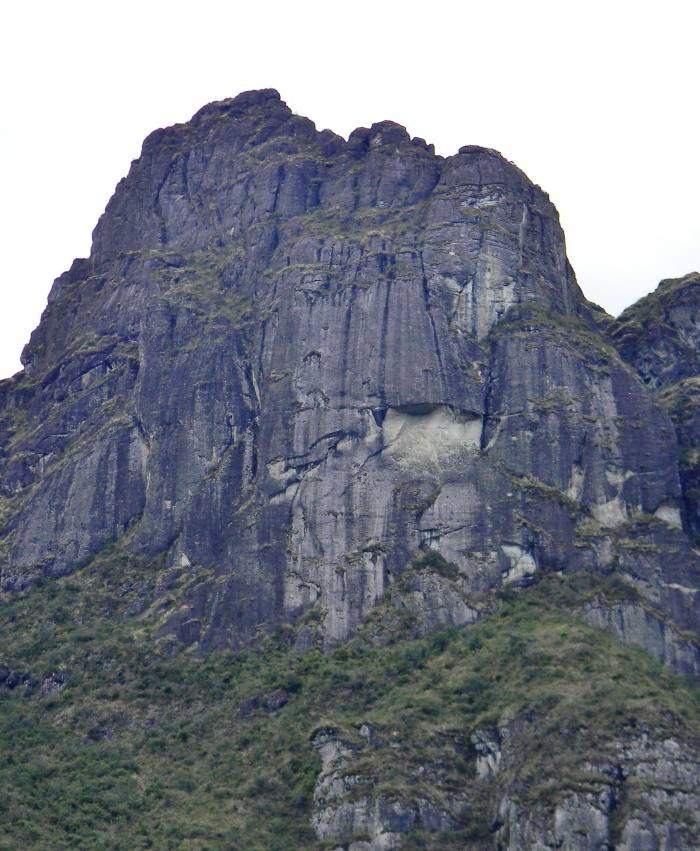 A closer look at the cliffs–(Kathy’s image)

The opposite view from lake–(Kathy’s image) 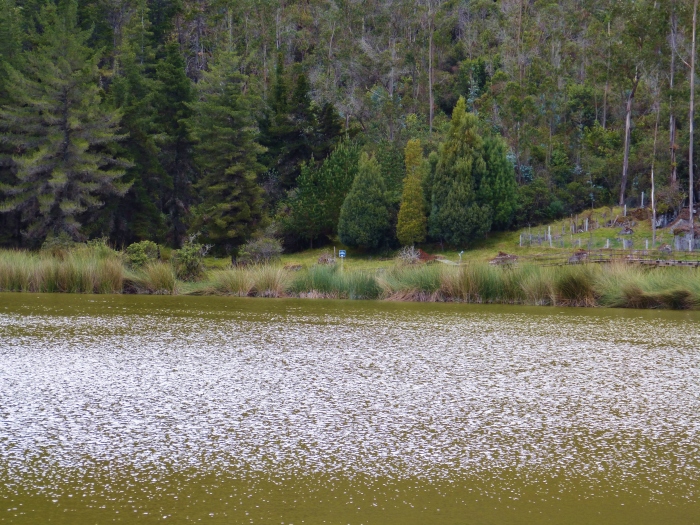 This reminds me of the Pacific Northwest in the US. (Sara’s image) 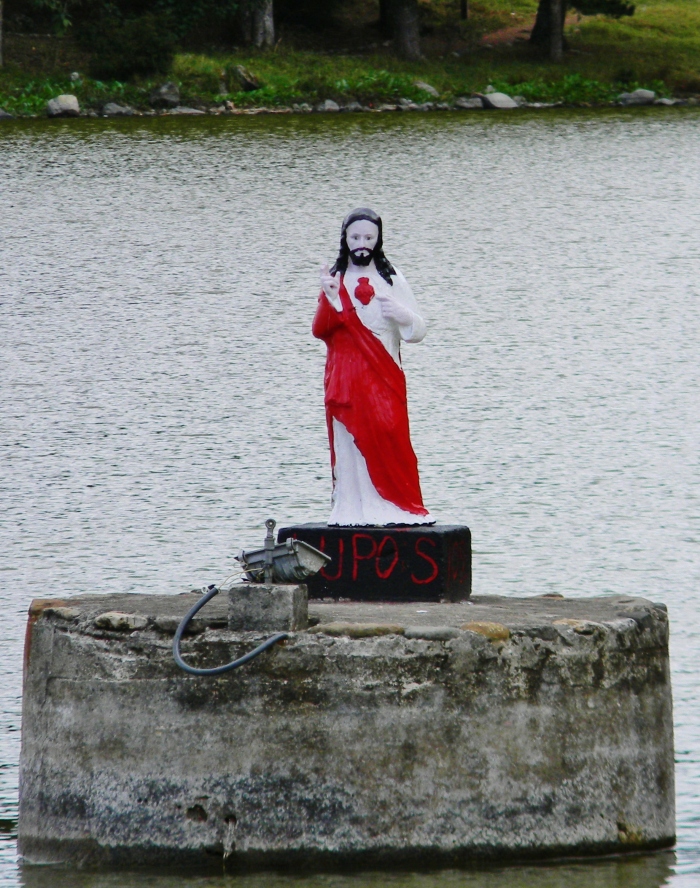 Large rock near the lakeside–(Kathy’s image) 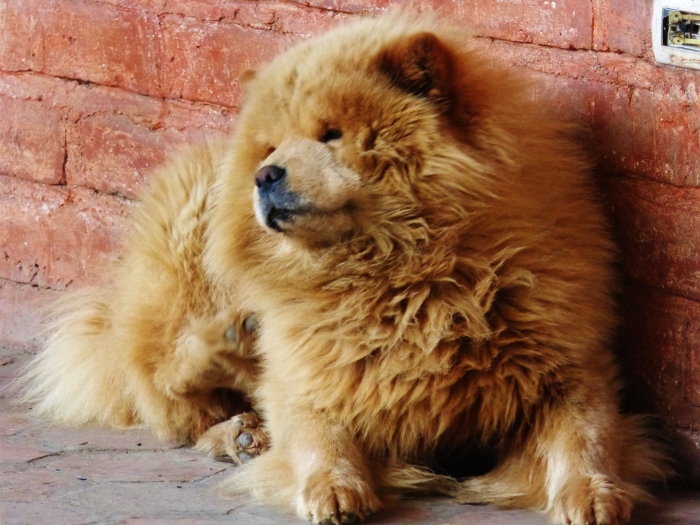 This dog also keeps an eye on things. (Sara’s image)

The ride back to Girón was equally lovely. 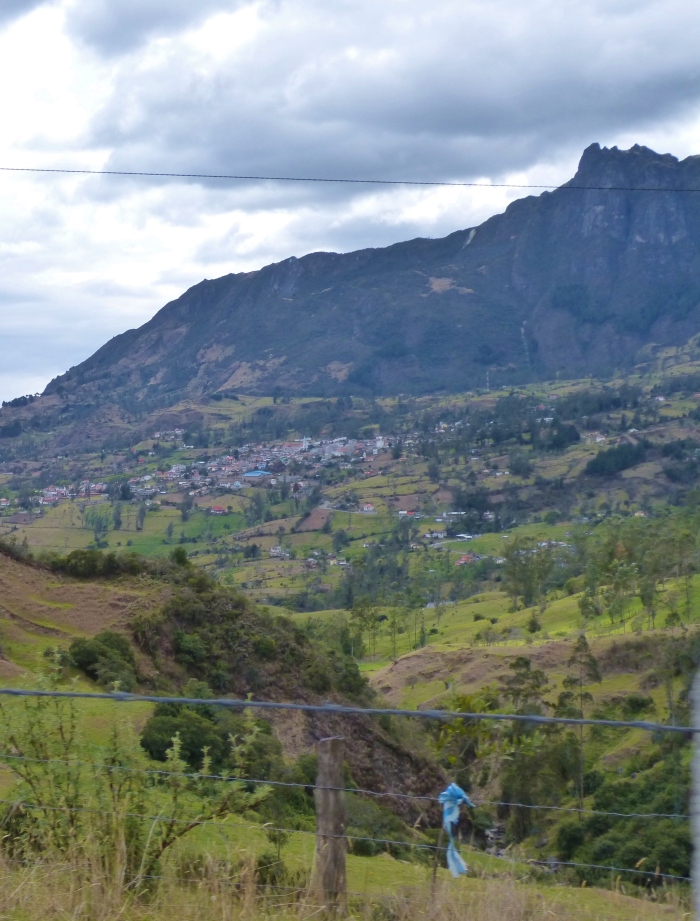 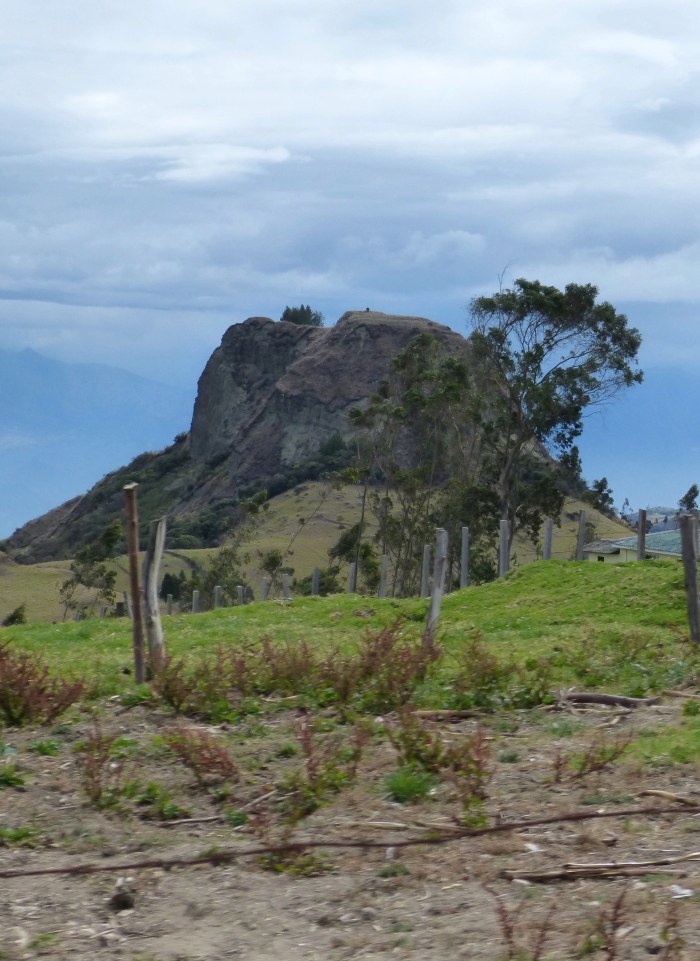 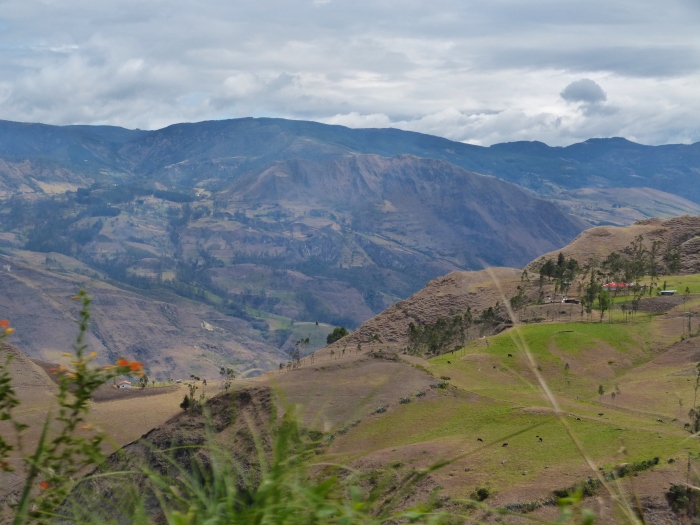 When we returned to Girón, the sun came out. 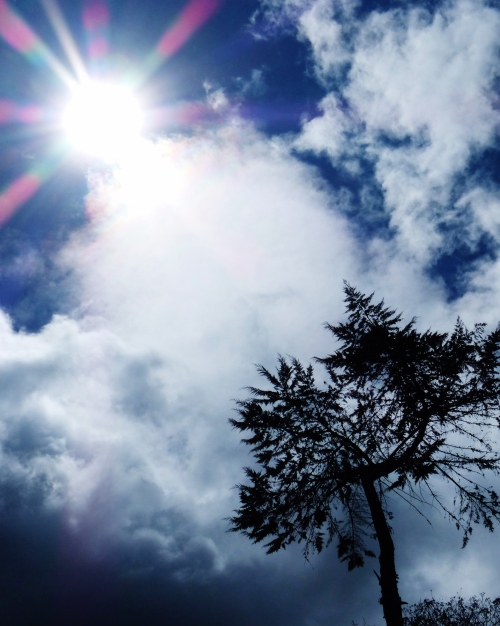 We had time to kill before the bus left for Cuenca, so we visited the local Mercado. 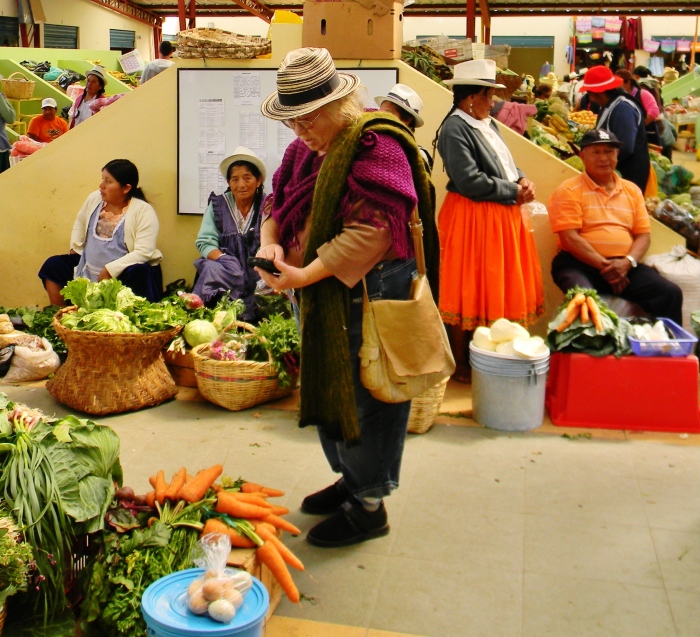 We saw a number of women in traditional dress. (Sara’s image)

At the Girón Mercado–(Sara’s image)

Sara and I both photographed this woman. (Kathy’s image) 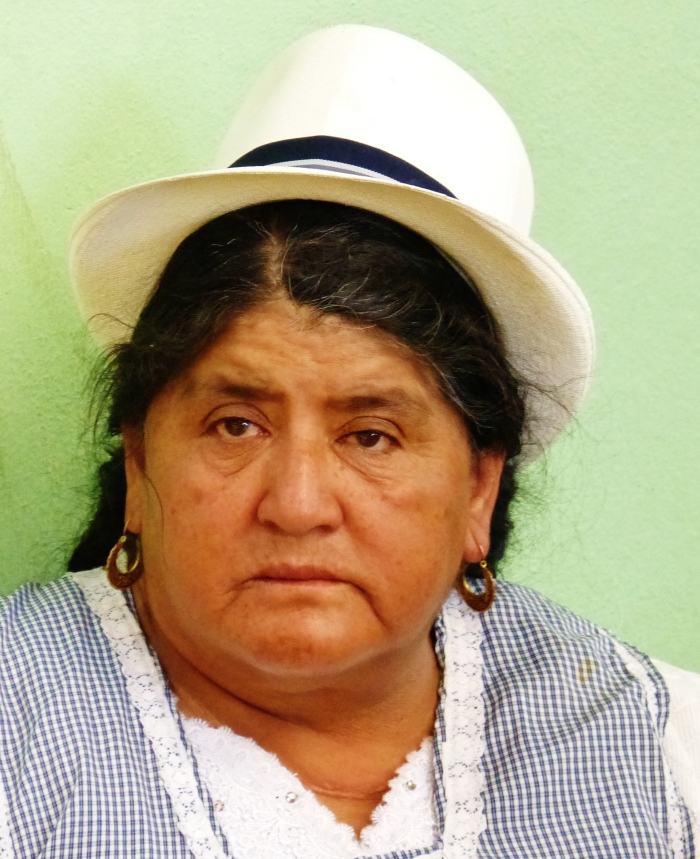 A lovely, if serious, face–(Sara’s image) 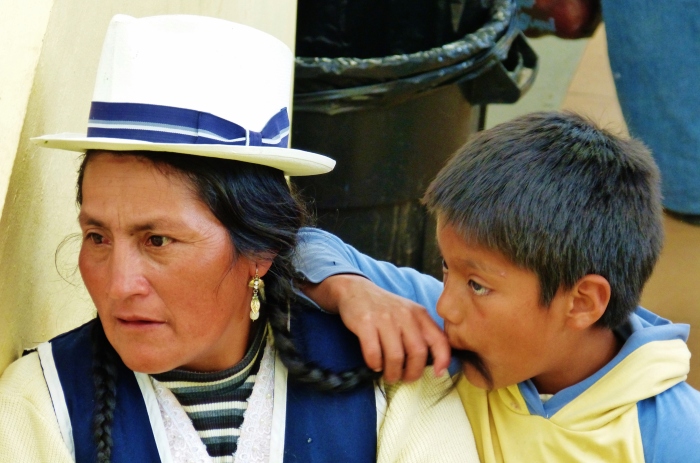 A boy plays with his mother’s braid (Sara’s image)

Before leaving Girón, we talked to local children and had ice cream cones. 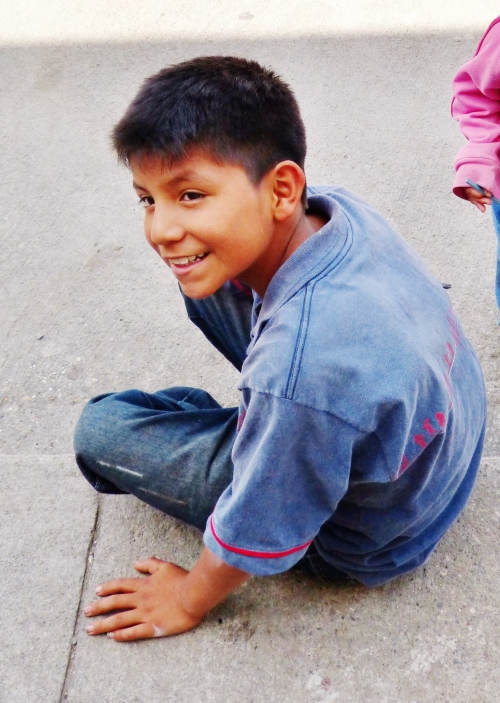 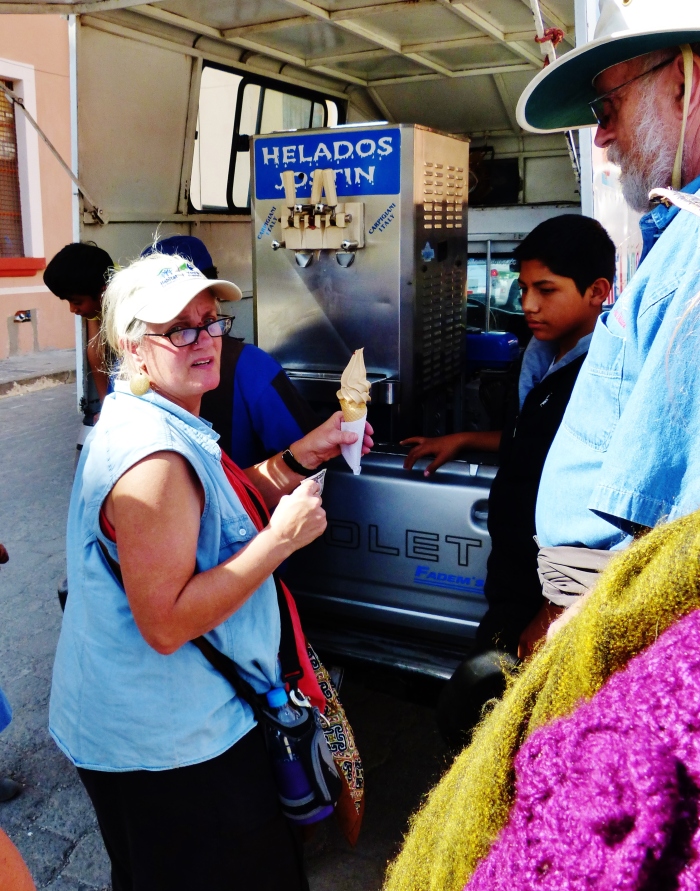 All aboard the bus to Cuenca–(Sara’s image)

The trip home was equally lovely–

Can anyone explain why the skies are always so amazing? (Sara’s image)

–Except for the pig and guinea pigs being roasted.

But even lovelier than the trip itself, were the friends we took it with.

Susan is an author whose novels you’d enjoy.  Below is the trailer for her soon-to-be-released thriller, The Plan.

She was the first to welcome me to the writing group I joined several months ago.  Her husband Fred is a psychologist.

Below is a video Susan created about our day in San Fernando.  (To visit her website on e-publishing, click here.)

David and Juan, you probably remember.  I wrote about our previous trip with them to the Girón waterfall. 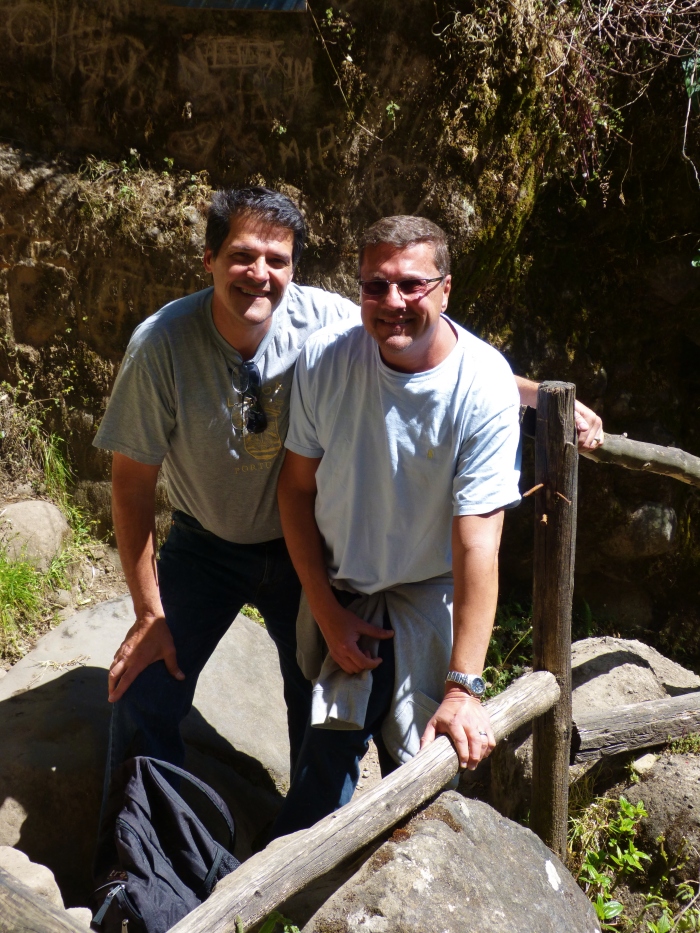 We’re an unlikely group—a gay couple, a lesbian couple, and a retired heterosexual one, as well—much older, even wiser, and with more energy than the four younger of us combined.

We’re happy.  We’re blessed.  And we have the friends who guarantee that both continue.

When did you last learn a thing or two about abundance?  Have you ever had friends who were much older than you?  How did you feel the last time you saw something beautiful?

121 thoughts on “An Expat Experience of San Fernando, Ecuador (A Lesson about Abundance)”