Two weeks ago, I explained why my partner Sara and I have decided to move overseas again, why we’re willing and even wanting to leave the US and the comforts it affords.

Sharing how easy it’s been to lapse into a kind of complacency since being home from Haiti (where we lived for a year) and Vietnam (where we were the year before that), I described our struggle with the developed world and explained why we no longer want to take our own privilege as US citizens for granted, but desire, instead, the simplicity of a less consumer-driven economy, a country where we won’t be so insulated by the abundance and resulting materialism of American living.

I tried, in my previous post, however, to emphasize that, for us, this is a lifestyle choice, one our relative wealth and opportunity as Americans allows us to make.  It’s a choice most in the developing world rarely have the chance to make.

Still, the question remains, one a number of you asked several weeks ago, when I first shared our news, why we’ve selected Ecuador as our destination, and the city of Cuenca, specifically.

Below are just a few of the reasons that might interest you. 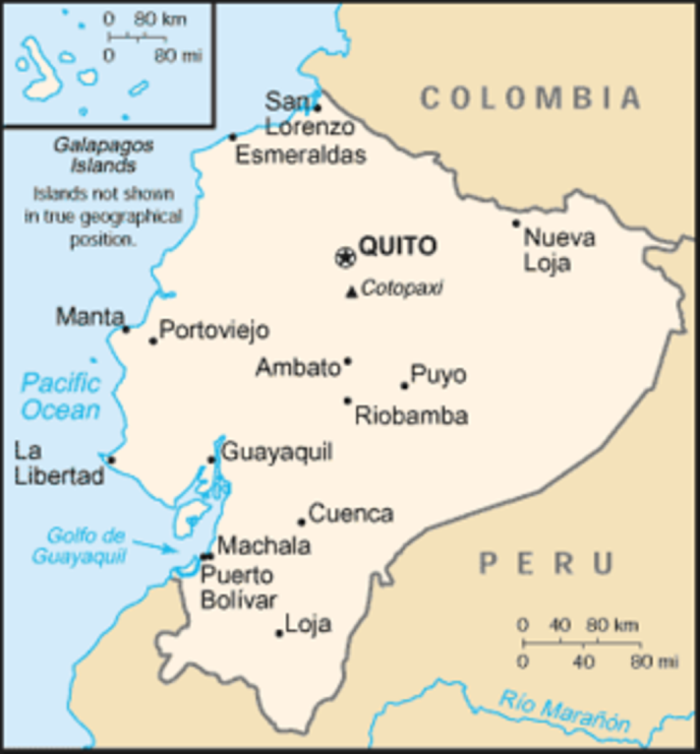 map of Ecuador via Wikipedia

I studied Spanish in high school and majored in Latin American Studies, when I transferred to the University of Kentucky in 1981.  But even more importantly, I had a set of second parents who were Spanish-speaking.  I grew used to the sounds spoken in their home, and even if I didn’t always understand each and every word, I loved the music of their language, slept more soundly hearing its rhythms in the distance.  They loved me and comforted me, especially after my dad died.  Their language spoke to the lonely and unloved in me.  I craved the culture of caring in their home.  Perhaps even, I inadvertently came to associate their values with those of an entire ethnicity, so that moving to Ecuador may, on some level, mean moving home, returning somehow to Estrellita and Raul’s warmth and affection.

We selected the country of Ecuador, in particular, for a number of reasons, one being its relative proximity to the US.  Quito, the capital, is a mere 3.5 hour flight from Miami, and because a low-cost carrier connects Lexington to south Florida, we can make that trip for $73 each way.

Also, Ecuador, for most of the year, except for the months during daylight savings, is in the same time zone as the East coast of the US.  Having lived in Vietnam, we know the struggle to communicate with friends and family back home when there’s a 12 hour difference, and we don’t relish having to fly some 30 hours to reach the US either—the time it took to travel from Lexington, KY to Hanoi, for example.

But Ecuador, beyond its proximity to the US, has an enormous amount to offer geographically.  Its topography varies from the Andes that run down the middle of the country to the Amazon in the east and a coast with stunning, largely uncommercialized beaches to the west.  Not to mention, the Galapagos Islands just off-shore, with their giant species of turtles, the place where Darwin developed his theory of evolution and wrote the Origin of the Species.

We selected Cuenca, more specifically, since my partner Sara hates the cold and I despise heat.  Cuenca, with its perpetual spring-like weather, is a great climatic compromise for us.  It’s just south of the equator, so the there’s little temperature variation throughout the year, but an altitude of 8,200 feet means it rarely drops below 50 degrees Fahrenheit or rises above 75.

Aerial view of Cuenca via Americapictures.net

In much more practical terms, however, the cost of living in Ecuador is a fraction of that in the US—many suggest only 25% of North America–some even say a tenth.

Also, because Ecuador is an oil-producing country, gasoline is a mere $1.48 a gallon, and because the rest of economy is agriculturally based, food costs are low and eating out at restaurants rarely costs more than $3 per person—for a several course meal.

(The national currency is the US dollar, by the way.)

Ecuador is also known for its excellent and affordable medical care.  And Cuenca is becoming a popular destination for medical tourism, much like Bangkok has been for a number of years.  North Americans are traveling to one of the city’s several medical centers for procedures that cost too much in the US or are not covered by insurance here—especially cosmetic ones.

In Ecuador, doctors, most of whom are schooled in the US, still make house calls for no extra charge, and office visits are less than 25 dollars US, even without insurance.  Also, the most expensive drug I take to treat my bipolar disorder costs a $38 co-pay in the US but a mere $40 in Cuenca pharmacy—the cost even without insurance.  In other words, all of the medications I take are available there, most for a fraction of what I pay here—even with my insurance paying the bulk of the cost. Perhaps, that tells us something about how inflated the prices of pharmaceuticals are in the US compared to the rest of the world.

A number of online sources suggest that Ecuadorians are warm and caring, receptive to strangers, responsive to even lame attempts to learn their language, and many indicate that the Cuencanos remain the warmest among the already warm, kind, and caring.  Even more importantly, perhaps, I have one blogging buddy, Lisa at Zeebra Designs and Destinations, already living in Ecuador, and Sara has a friend and colleague in Quito.

Last, but certainly not least, Cuenca is considered the arts capital of Ecuador.  Anyone who knows me or reads my blog, recognizes quickly my creative inclinations.  In Cuenca concerts are often free, music is everywhere, and exhibits are frequent gathering places for a large expat community whose numbers are over 1000, mostly from North America.

And besides all of this, Cuenca has been declared a UNESCO World Heritage Site for its well-preserved, Spanish colonial architecture and city planning.

So there you have it, folks—just a few of the many reasons we are making this move.

While Sara continues her efforts to save the planet from our new home in South America, I’ll try to anchor our adventure in words—sharing it via blog and periodic pieces in The Huffington Post.

I may be a bit of a bore these days, but I DO have a dramatic past.  Hopefully my future is looking every bit as exciting as my childhood forty years ago.  There may be no mafia involved now, but there will be challenge.  There will be growth and gain, sacrifice and maybe even pain.

We hope you will make this journey with us.  I know you won’t be bored.  You’ll inevitably see yourself in us.  You’ll laugh.  You’ll cry.  And though you may not be an expat, per se, I’ll bet “foreigner” might sometimes describe how you feel, as well, misunderstood even in your own home, among the ones you love the most.

In reading our misadventures, you’ll be comforted to know you aren’t the only one—not the only misfit attempting to survive a crazy, wacky world.

Again, please forgive my being an absentee reader of your posts.  I am spending every spare minute preparing our house for the market.  Things should return to normal once we are moved and settled.  I will be blogging from Ecuador.  I’m committed to that!  Love and miss all of you!

Note:  Please visit idiomART, our Etsy site.  In honor of our upcoming move, my holiday cat can ornaments are now on sale for 50% off—marked down from $14 a piece to $7.

104 thoughts on “Misfits in a Wacky World: Why we’re Moving to Ecuador (Part 2)”